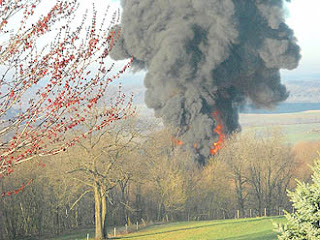 The Atlas well burns on Wednesday, March 31st.
The Pittsburgh Post-Gazette.com reported a fire at a gas well in Washington County, PA,on March 31st.  A frac pit caught fire about 8 a.m.  The land owner and a neighboring family smelled a "horrendous gas smell" for several days before the fire erupted, but numerous calls to state officials were unsuccessful.  The fire was put out by Washington County's hazmat team who also had to use foam to extinguish a fire at a holding tank near the wastewater impoundment pond.  The pit's rubber liner was allowed to burn out on its own, according to Public Safety Director Jeff Yates.  Altas Energy is the company operating the well.  Read the newspaper account here.
Watch a TV report video here.
Posted by Peacegirl at 10:05 PM