Uploaded by rnntv on Feb 14, 2012 An RFL Special Investigation into Hydrofracking. Dimock, PA is a town so divided over gas drilling - the two sides describe the fight as a civil war. On the one hand, there are people who claim the health consequences of hydrofracking are so severe, it contaminated their water and left them unable to have kids. On the other hand, there's people who say it's the best thing that ever happened to Dimock. But no matter which side you speak to...everyone agrees, it's changed their community.
Posted by Peacegirl at 3:14 PM 1 comment:

Sandra Steingraber: Carcinogens In Water or Air Leads To Cancer

Published on Jun 25, 2012 by LivingDownstreamFilm "I'm only a population of one. I would not be able to say with certainty that the cause of my disease was any one chemical. We can't say that, biologically. What we can say is that, when you have carcinogens in the drinking water supply, or in an air supply, or in a food web, somebody's going to get cancer." —Sandra Steingraber
Posted by Peacegirl at 1:23 PM No comments:

One dead in explosion at BP compression station

An explosion at a large gas compression station owned by BP killed one worker and seriously injured two others.
The explosion, which occurred at about 8:15 a.m. today at BP’s Piñon Compression Station, temporarily closed U.S. Highway 160 five miles east of Elmore’s Corner.
“At this time the immediate concern is for the people involved,” Julie Levy, a spokeswoman for BP.
Dan Bender, spokesman for the La Plata County Sheriff’s Office, said one was confirmed dead and two seriously injured. There were several other workers on site at the time.
Residents in the area reported hearing the explosion. Bender said there was an explosion but no fire followed. There is no ongoing risk at the facility in conjunction with the explosion, he said.
The highway was reopened after about a half an hour.
The compression station is BP’s largest in La Plata County. The company routinely works with local emergency workers on disaster plans in the event of an explosion.
The compression station is one of two major facilities owned by BP where natural gas is gathered to be put in a pipeline.
It is located in the 35000 block north of Highway 160 near a fire station owned by the Upper Pine Fire Protection District.
Further details were not immediately available.
shane@durangoherald.com

NATIONAL DAY OF ACTION ON FRACKING • JULY 28 • THE US CAPITOL • WASHINGTON, DC • SIGN UP HERE: http://www.stopthefrackattack.org/
Posted by Peacegirl at 12:37 PM No comments:

Will Gov. Cuomo Frack New York State? We Can Help Stop Him!

Here's what we can do to try to stop this ghastly plan that Cuomo has come up with:


Dear Friends,
In response to the New York Times Article from 6/13: Cuomo Proposal Would Restrict Gas Drilling to a Struggling Area  Here are 4 things you can do:
1. Read the attached press release
by the Northeast Organic Farming Association that will raise an alarm for everyone.

2. Watch: THE SKY IS PINK: Josh Fox's 18 minute short created for Governor Cuomo and released by Rolling Stone Magazine,
and read: www.rollingstone.com/politics/blogs/national-affairs/new-anti-fracking-film-by-gaslands-josh-fox-targets-cuomo-governor-what-color-will-the-sky-be-over-new-york-20120620
3. Call Governor Cuomo Tuesday, June 26th and demand that he ban fracking in New York State: 1-866- 584-6799!
The New York State Legislature is almost certainly going to end their session this week without protecting New Yorkers from fracking, particularly residents of the Southern Tier. Now it’s up to the Governor.
The New York Times article states that gas permits may begin being issued later this summer primarily in Broome, Tioga, Chenango, Chemung and Steuben Counties. In press interviews over the last couple of days the Governor has tried to backpedal, claiming that no decisions have been made, but he has not committed to protecting New Yorkers from fracking. He has not even publically admitted that the SGEIS is still lacking the necessary health and environmental studies.
YET: "More than seven out of 10 New York state voters (72 percent) think that Governor Cuomo should "wait for all the necessary health and environmental studies to be completed first before opening the state to fracking," according to a major new Public Policy Polling (PPP) survey." from http://www.marketwatch.com/story/poll-vast-majority-of-new-yorkers-want-cuomo-to-wait-for-more-research-before-opening-empire-state-to-fracking-2012-06-21
In just two days New Yorkers Against Fracking generated thousands of calls, faxes, Facebook posts and tweets to Governor Cuomo to ban fracking. Hundreds of us attended rallies across the state, including one just outside of the Governor’s office in the Capital.
But this has not been enough. We need to work harder to make our voices heard!
Please, join us Tuesday, June 26th for a call-in day to Governor Cuomo to demand environmental justice for the Southern Tier - and the rest of New York:
1-866-584-6799.

Tell him:
No to a fractured New York ! No to sacrifice zones! We are one New York !
Families in the Southern Tier deserve good health and clean water too!

4. Forward and post these requests far and wide!!
Thank you!
Anna

Anna Sears and Nedra Harvey
R-CAUSE (Rochesterians Concerned About Unsafe Shale-gas Extraction)
http://www.r-cause.net/
LET'S DO ALL WE CAN TO STOP BIG GAS IN NEW YORK STATE!﻿
﻿
Posted by Peacegirl at 12:22 AM 1 comment:

The Sky Is Pink: Josh Fox's New Movie For NY

I know I don’t have to tell any of you what a vulnerable moment this is for New York and all New Yorkers. The New York Times has reported that Governor Andrew Cuomo will soon announce that drilling will be permitted in parts of the following five New York Counties: Broome, Chemung, Chenango, Steuben and Tioga in the Southern Tier. The Governor’s office has made no official announcement as yet, but all indications suggest that the counties listed above will be the first to be sacrificed and that drilling may be permitted as early as this summer. We’ve made a new short film, The Sky is Pink, which has just been released at Rolling Stone Magazine online. The Sky Is Pink details the shocking campaign of misinformation perpetuated by the gas industry, their flagrant disregard for the health and safety of the communities they ravage, and the historic decision that Governor Cuomo is about to make. We’re telling Governor Cuomo that there are no expendable counties or communities in New York State and that we are not willing to allow the gas industry to exploit or endanger any of our fellow citizens. Governor Cuomo and his administration must be held to their promise to make decisions on behalf of New Yorkers based on sound science and they must provide the people of New York with a full Health Impact Assessment. We demand that no weak compromises or deals are cut that send New York down the slippery slope toward a full-scale assault by the gas industry. I’m asking you to help us make sure this film reaches far and wide. Clearly the 60,000 comments received by New York’s Department of Environmental Protection have been ignored. Clearly, we’re going to need to be even louder this time if we are going to be heard. We need to tell Governor that hydraulic fracturing is not safe, not now, not ever and not in New York State.

Please, send it to everyone you know. Post it everywhere you can. 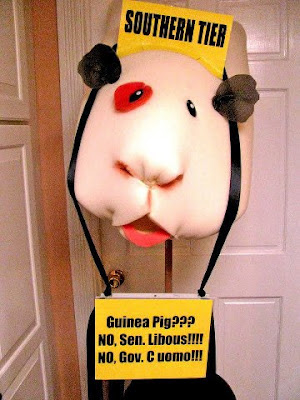 Governor Cuomo, do not frack New York State! No experimentation on human beings!﻿
Posted by Peacegirl at 8:52 PM No comments:


It is not okay to turn any part of New York or any New Yorkers into sacrificial guinea pigs. The science is clear that nothing short of a statewide ban will protect all New Yorkers.

Do not frack New York!  Fracking poorer counties is unethical just because the citizens need money and think that gas drilling will make them rich.  Start small in the Southern Tier?  Then what?  With a foot in the door, go big later?  Is that the plan?  Let drilling spread gradually?  No.  We must not allow New York to be fracked.

Hancock, NY, Compressor Station: How Loud Would It Be?

A creative edit of Steve Sullivan, spokesmen for Millennium Pipeline Company, with Anthony DePalma (Delaware Lake Assocation) and graphics illustrating what 15,000 horsepower is like... Will it sound like a refrigerator?
Posted by Peacegirl at 4:37 PM No comments:

Thank you, Vera Scroggins, for taping this talk!  New Yorkers, listen up!  (I'm one of you!)
Posted by Peacegirl at 9:27 AM No comments:

Taped 6-6-12. At Calvary United Methodist Church, Vestal, NY.. Living Downstream from Fracking and the impacts from all the toxins from the gas extraction process on our environment and health.
Posted by Peacegirl at 11:32 PM 2 comments:

Published on Apr 13, 2012 by 16x9onglobal A new frontier of natural gas production is making controversial headlines. Hydraulic Fracturing or "fracking" is becoming more common in Canada. But experts say "fracking" can cause contaminated ground water, earthquakes and pollute our land with toxic chemicals.
Posted by Peacegirl at 2:08 PM No comments:


Published on May 4, 2012 by uneartheddocumentary Un•earthed: Setting the track record straight - A video exposing a flawed claim often abused in the sales pitch for promoting shale gas development across the world: "With a history of 60 years, after nearly a million wells drilled, there are no documented cases that hydraulic fracturing ('fracking') has lead to the contamination of groundwater." Brought to you by the team behind the upcoming South African feature documentary, Un•earthed, that is investigating natural gas development and the controversial method of extraction known as "fracking" from a global perspective. Should South Africa and other countries drill down?

Posted by Peacegirl at 12:48 PM No comments:


Want to know who is against gas drilling in New York, Pennsylvania, and other states, and Canada, Austria, Bulgaria, France, Ireland, Romania, South Africa, and Switzerland? Click /uploads/8/0/2/5/8025484/6-3-12hoff_bansmoratoriastatementsrevision.doc
Thanks to Joe Hoff, Chairman of Keuka Citizens Against Hydrofracking!  A lot of work has gone into this document.  Data current as of June 3rd, 2012.  Fifteen pages long.  It will surprise you!
Posted by Peacegirl at 10:25 AM No comments: