The Gathering Line from The National Alliance for Drilling Reform: 1/19/10

Something STINKS about TCEQ's recent Fort Worth air study. Considering that the Barnett Shale has a staggering asthma rate of 25% compared to 7.1% statewide, TXsharon thinks it's time for an intervention in Texas. Bluedaze: DRILLING REFORM FOR TEXAS

Follow the FRACTURE and you will find fraccing! Read it at Cheap Tricks and Costly Truths.

When the citizens of Pulteney learned that a gas well in their town was going to be converted into an underground injection well for disposal of Marcellus wastewater, they didn't take the news sitting down. Sue Heavenrich blogs about last week's town board meeting on Marcellus Effect.

Flower Mound Town Council will vote Thursday night on changing the zoning and ordinance to allow a Waste Water Centralized Collection Facility. What is a CCF and what will it mean to Flower Mound and their neighboring communities? Read about it at stopthedrilling

Posted by Peacegirl at 10:40 PM No comments:

Flaring at a New Well Near Montrose, PA 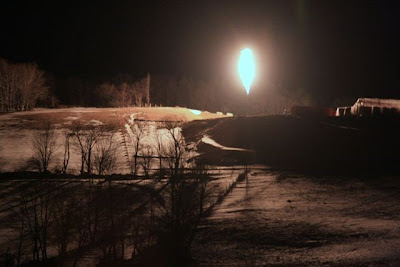 A resident of Montrose, PA, took this picture and wrote:

"Drove by the Markovitch well tonight and saw this spectacular sight. The sound was like a train or a jet engine. The flames were 30-40 ft. high. Flaring the newly fracked well. This is a Alta well, just north of Montrose, PA."

Rents have doubled, tripled, quadrupled in Bradford County, PA, as gas drillers arrive with plenty of money to spare. Landlords aren't renewing leases for local residents in favor of renegotiating new lucrative leases with gas companies. Who wouldn't want all that money? Low-income residents and the elderly can't find housing. Waiting lists are getting longer and longer. It looks like many of the local people will become homeless. Local motels are booked for months in advance. Tourists are out of luck. Drive by the Towanda Motel, and look at the pickup trucks. Look at the license plates- Texas, Oklahoma.

Where are the gas companies? Can't they help? They make a lot of profit. Are they going to share the wealth? I seriously doubt it.

MAKE GAS DRILLERS SUBSIDIZE HOUSING FOR THE NEEDY!
Posted by Peacegirl at 9:27 PM No comments:

The Texas Department of State Health Services is looking into a possible cancer cluster in Flower Mound. 5 children and 2 adults have been diagnosed with Leukemia. All live near gas drilling activity. Read about it at www.stopthedrilling.blogspot.com

How does Texas compare with other states? A statistical analysis with graphs reveals the truth at Bluedaze: DRILLING REFORM FOR TEXAS.

How do yoga, the Bible, and hydrofracking relate to each other? Peacegirl sees a connection. If it were an answer by Karnak the Magnificent (you would have to be a certain age to know about Karnak!), it would be amusing, but it's not. Yoga, the Bible, and Hydrofracking brings up the issue of doing harm. Is hydrofracking harmless? No. Another question: Who will listen? There are many people who are telling their stories about how gas drilling has adversely affected their lives. Is anyone listening? From Peacegirl at Gas Wells Are Not Our Friends.

From atop the Marcellus Shale, Splashdown reports that a recent PA Supreme Court ruling states local municipalities can regulate where gas wells are located through zoning ordinances, pre-empting PA's Oil and Gas Act. Read how Greenfield Twp. stopped Exco Resources from drilling a misplaced well, despite their DEP permit.

Posted by Peacegirl at 12:38 AM No comments:

Yoga, the Bible, and Hydrofracking

At yoga class this afternoon, my teacher talked about the Eight Limbs of Yoga. The first limb is the yamas. The first jama is ahimsa or universal morality. It means showing compassion for all living things. One is not to injure or show cruelty to any creature or any person in any way whatsoever. In every situation one adopts a considerate attitude and does no harm.

Hydrofracking, the method used by gas companies to extract natural gas from deep in the earth, is a very violent, toxic, and harmful procedure, causing harm to people, animals, and, equally important, Mother Earth, who supports us with all our needs, if we but treat her with respect and care.

A friend of mine who lives in Dimock, PA, wrote a post yesterday about her frustration that no politicians will listen to her story. Furthermore, her neighbors want more gas wells. They want the money. Here is what she wrote:


Have you wondered how many of our "elected" officials or their friends and affiliates have leased with the gas company? Just a thought. I spoke at length to Senator Baker's office-Tom Uneski. He told me they do represent the constituents and the constituents want the leases and they want them now-not later-not after the studies are done or safety regulations- now. When I told him another neighbor reported orange and filthy household water this weekend(great New Year's start!) he said well DID they sign a lease? Whether you signed a lease or not is not the point! We were lied to, mislead and have lost our homes as we once knew them and not one elected official in PA will do anything about it! I suppose they figure since we are already a mess out here why not let them keep drilling! Let's double the wells next year! Who cares? I ask Baker, Yaw, Carney, Pickett, Majors-Who will YOUR constituents be? Who will live here? Who will be able to live here? Who will pay the taxes(NOT THE GAS COMPANY!)Pickett wants to lease the state lands for income-no tax on the gas company. Do they really believe Dimock is the exception? This won't happen in Wyoming County or Luzurne County? So please, if you haven't called the elected officials regarding the very real incidents and concerns that you are aware of-please call them and ask your friends and neighbors to call. Flood them with calls-This is it folks. The window is just about shut- it will be shut and nailed shut by our Senators, our Governor, Sec. Hangar, Congress, the blissfully ignorant citizens of PA who obviously refuse to educate themselves and continue to delude themselves that the money makes it all worth it. Call Senator Yaw tomorrow 717-787-3280- he won't be in because he is too busy making commercials for Chesapeake(Carney' s good guys)!

When I read her post, I could not help but think about a Bible story- the parable of the rich man (Luke 16:19-31). Lazarus, as you may recall, was living in terrible conditions with sores all over his body. The rich man paid no attention to him, even though he sat at the rich man's gate. One day both men died. Lazarus went to be with Abraham. The rich man ended up in Hades where he was in torment. He saw Abraham and Lazarus far away. As the story goes, the rich man tried to get Abraham and Lazarus to help him. But they would not, saying that the rich man had had every luxury in life, and now he was reaping his reward. Furthermore, no one could cross over the great chasm to help him. Next the rich man asked if Lazarus could go back and warn his five brothers so that they would mend their ways and not end up in Hades, too. Abraham said, "They have Moses and the prophets; let them listen to them." But the rich man, knowing that his brothers would not listen to Moses, he pleaded with Abraham because he thought,if someone came back from the dead, his brothers would pay attention. Abraham said, "If they do not listen to Moses and the prophets they will pay no heed even if someone should rise from the dead."

I constantly see the blindness of people who want money from a gas lease, but who purposely refuse to look upon the Earth, the animals, and human beings, who are all irreversibly harmed by the dirty business of extracting gas from the Marcellus Shale. The only benefit I know of from gas drilling is profits- MONEY. Most of the profits go to the gas industry, especially the CEOs. A few landowners get a lot of money. But there is absolutely no other reason to support the industry. The money will not make any difference in the long run after water is contaminated, the air is lethal to breathe, and the soil will no longer sustain animals or crops since all well pads become superfund sites.

Why won't anyone listen to my friend in Dimock?