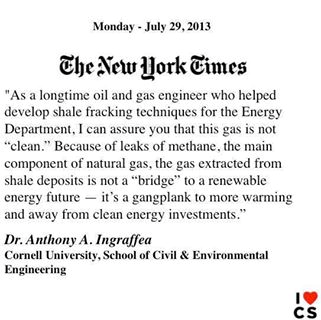 Posted by Peacegirl at 12:29 PM No comments:

Here is a very important issue that demands our attention:
Radiation concerns everyone along the Genesee River downstream of Angelica, NY !
(The Genesee River flows north and empties into Lake Ontario.)

The Hyland Landfill in Angelica is along the Genesee River that flows north through Rochester into Lake Ontario. It is one of five in NY State permitted to accept tailings and other waste from fracking operations. Hyland already accepts drill cuttings from PA frack sites and wants to expand the landfill to accept more radioactive fracking waste. The DEC public comment period on this expansion request has been extended to July 21: http://www.dec.ny.gov/enb/20130508_reg9.html#902320000300002
Learn more here: http://www.weebly.com/uploads/8/0/2/5/8025484/hyland_landfill_comment_period_open.pdf

This is urgent! Please submit a comment, however brief, to:

Thanks to Anna Sears and Nedra Harvey, co-founders for this information.
R-CAUSE (Rochesterians Concerned About Unsafe Shale-gas Extraction)
http://www.r-cause.net/

Posted by Peacegirl at 11:36 PM No comments:


Josh Fox on Gasland Part 2, the Fracking-Earthquake Link & the Natural Gas Industry’s Use of PSYOPs

An excerpt from Democracy Now (7/12/2013 show)
AMY GOODMAN: What did you find in part two? And start by talking about the significance of this Science journal study in relating earthquakes with fracking.

JOSH FOX: Well, first, in terms of earthquakes, which we do cover in the new film because there’s a huge shale play in California, and in fact there’s a Legacy thousand-acre oil field in the center of Los Angeles, which is being drilled and fracked right on top of the Newport-Inglewood fault line—the earthquake study showed that earthquakes far away, you know, on the other side of the planet, could then trigger bigger earthquakes where they have injection well facilities. So, injection well facilities are used for fracking waste. Fracking, you know, creates an enormous amount of wastewater. When they frack the wells with two to nine million gallons per well of fluid and water, that fluid has to come back up and be disposed of somehow. The industry has a huge problem figuring out how to dispose of it, so they inject it back down into the ground. And what the report says is that fault lines are becoming critically stressed by the process of injection wells. It also says that the fracking itself can cause minor earthquakes.

JUAN GONZÁLEZ: Josh, your original film has provoked quite a bit of effort to discredit some portions of the film, especially the now-legendary portion of people’s faucets catching fire. Can you talk about the efforts of the industry to discredit your work?

JOSH FOX: Well, the oil and gas industry has been attacking the film, the families in the film, the scientists in the film, consistently for the last three years since it came out, and they’re at it again with this new film. It’s extraordinarily disheartening to see that this is their strategy. It’s deny, deny, deny, spread money around, try to influence politicians, spend lots and lots of money in the media to convince Americans that it’s a great idea to drill one to two million new gas wells. Those are the projections. The oil and gas industry has leased more land than the total landmass of California and Florida combined, which means that a lot of those adjacent properties in these 34 states where the drilling campaign is going on are also influenced, so it’s maybe twice that amount of area. It really is shocking that what they’re saying, similar to the way that they attack climate science, that some of these things are a hoax, that they’re not actually true. This is a really blatant attack on the science, on the way that this issue has been reported for the last three-and-a-half years. And they also revealed themselves to be doing some kind of dastardly things in the background without us knowing about it. (End of transcript excerpt)

My comment: One interesting (and disturbing) fact that was brought out in this film: Fresh water being transported to gas well sites is "fresh" because it is new to the site, but it can be anything but fresh. This "fresh" water is brine or treated frac fluid or other such combinations. So the trucks say FRESH WATER on the outside, but are not what the average person would think of as fresh.

A shout-out to Texas Sharon, Sharon Wilson, who is mentioned in the Gasland film in regard to her knowledge of PSYOPS activity in the gas industry! Kudos to this amazing woman who has been a warrior in this fight for more than a decade in Texas. Her story would make an Emmy-award-winning film.
Posted by Peacegirl at 11:32 AM No comments:

The video by Leland Snyder goes on for 13+ excruciating minutes.  Who can live near this kind of industrial activity?  There are diseases caused by sound and noise.

I think I would go stark-raving mad if I lived near this.   One such blow down, maybe this one, lasted more than 3 hours.

Below is Chip Northrup's commentary on the new documentary Gasland Part 2 by Josh Fox.

Northrup provides a lot of great information, including graphs showing what will happen in the near future if we continue to use fossil fuels or if we go to sustainables.


Where are we going when there is no more water to drink here on Planet Earth?﻿
Posted by Peacegirl at 12:38 PM 2 comments: