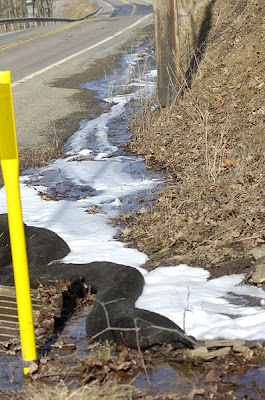 Monday, March 15th, there was a white soapy-looking substance flowing from a spring, down a slope, under the road, and into Pine Creek in Waterville, PA, according to Daniel Spadoni of the DEP, northcentral regional office. Officials were notified, and geologist, Cheryl Sinclair, came immediately to collect samples. Spadoni said that this problem was not caused by hydrofracking. The foamy substance was a surfactant known as Airfoam HD, used to treat Pennsylvania General Energy wells. The gas well company was using the whitening substance as a lubricant that lowers the surface tension between air and water. It is not listed on a Material Safety Data Sheet (MSDS) as being dangerous. And, while Spadoni claimed that people in the area could continue to drink their tap water in their homes, he also said that

We don't know for sure what its chemical composition is.

He indicated that there may be more than one suspect discharge.

This blogger, Peacegirl, wonders, based on this story, how anyone can know for sure that one is safe or that our children are safe. There are too many questions unanswered as usual. Just as the head of the EPA director, Christine Whitman, gave the green light after 9/11 and told everyone they could return to Ground Zero and that it was safe, we are told not to worry over and over again as spills and other pollution occur with gas drilling. The people who trusted Ms. Whitman, some of them, later died and are still dying from lung disease. They were given the wrong information. The gas drilling industry is doing the same thing wherever they operate. It cannot be trusted. Local officials, while trying to cope, do not always know the answers. They cannot always help when things go wrong. So what are people to do?

An update on this spill can be found at the SunGazette site here. This is an excerpt from that update:

Dave Mashek, a public relations consultant for PGE, explained: "Natural geologic fissures can result in the migration of a small amount of this material from the very top section of the wellbore during initial stages of drilling. This past weekend's rainfall of nearly 2 inches may have provided adequate saturation to force this residual drilling soap into natural fissures that reached the surface."

The PA DEP spokesman Daniel Spadoni, however, declined to term the substance as "soap." Samples have been sent to a Harrisburg DEP lab, results of which should be available in a few days.