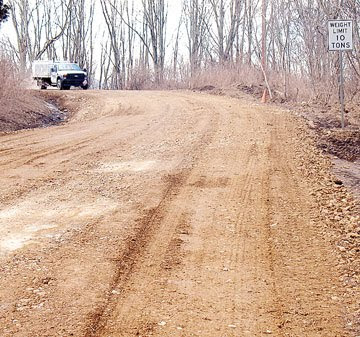 Roads are going to pot, quite literally speaking in Bradford County, PA. According to an article in the Rocket Courier newspaper, this is a paved road.  This picture (photo by Wes Skillings) shows a section of North Street just off Route 187 in Terry Township, Bradford County, PA.  The road you see here was supposedly filled in and smoothed out a week or so before this picture was taken.  As you can see, the road repairs didn't seem to make a big difference.

In Bradford County, as in most counties I would imagine, there are township roads, county roads, and state roads, and all of these roads are maintained by these different public entities.  It must be difficult to deal with this problem of deteriorating road conditions when you must first find out who maintains the road in question: town, county, or state.  Tina Pickett, who represents the county in Washington, says the townships should hold the gas companies accountable.  However, if a ruined road is a state road, the county has no control over it.

No one is suggesting that the gas companies aren't trying to repair the roads, but the scale of the problem is so great and getting worse, that the gas companies can't keep up.  There is also a problem getting enough gravel and other materials and a problem finding enough workers.  It seems everyone underestimated  the severity of this crisis.  In addition, as the Burlington Township Supervisor Ed Grant said recently,  "Nobody is really in charge and taking a comprehensive view.  Nobody has control over any one thing."

Bradford County Commissioner Doug McLinko has noted that the summer months will probably produce a major dust problem on the roadways.  Then there are the complaints about the trucks going too fast, hogging the roads and making life more miserable for local drivers.  Some residents of Terry Township reportedly have been frustrated due to lack of response to their complaints of speeding and wreckless trucks.

Since gas drilling operations are only in the beginning stages,  these problems do not bode well.  The situation will only get much worse as time goes on.

yep ,few weeks ago I watched a tanker flip on its side right from my livingroom window ,I live on North Street ,I fear for my dogs anymore who cross our country road to take care of bussiness ,thank the lord my children ar grown ,I could not imagine children on this street ever again ,this place will never be the same ,its bad when I had to go buy new curtains to hang in my windows for privacy that I no longer have ,much less the fact I cant even enjoy the simple pleasures of hanging my laundry outside for the freshness they use to bring into the home ,one last thing , had to go buy door locks for the first time ever ,its been pretty costly loosing my simple pleasures the country use to bring to me .