Canada's boreal forest is being destroyed day by day by the extreme fossil fuel development of the tar sands. This operation uses obscene amounts of water and natural gas and produces obscene amounts of carbon dioxide and greenhouse gasses. The area, the size of Florida or England, will be destroyed beyond saving- total destruction without hope of reclamation- ever.  The Obama administration is now considering building a pipeline, known as the Keystone XL Pipeline,  in order to deliver the oil throughout the US, even as far as the Gulf Coast.  An action is planned, starting August 20th, ending September 3rd, in front of the White House in Washington, D.C.  Josh Fox, director of the documentary, "Gasland,"  is asking people to come to Washington to join the effort.  This will be a very civil civil disobedience action.  Many arrests are expected.  Training will be given to each day's group of protestors. 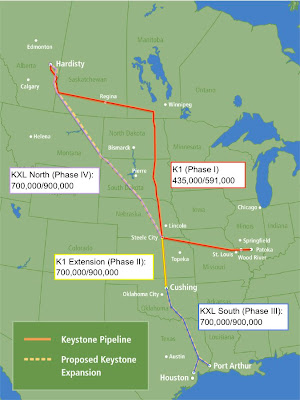 Posted by Peacegirl at 9:41 AM