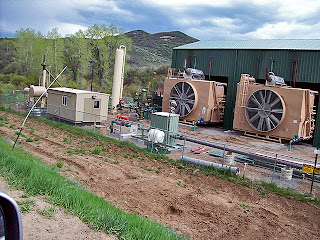 The focus has been on well pads, of course, but compressor stations are required, too. What problems will they bring?

Compressor stations pump gas through a pipeline by compressing the gas at intervals along the system. The engines run 24 hours a day, seven days a week, 365 days a year. (For a short description of how compressor stations work, click here. Keep in mind that the information is provided by El Paso Pipeline Group.)

Click here to see the Planet Hazard map, showing the location of the Woodhill compressor station. Note the close proximity to the Pulteney Hill School (a mere .46 miles) and less than five miles from 13 other schools. Can we not at least provide our children with safe, quiet places to go to school?

Read how Lamar County, TX, residents won a lawsuit after an eleven-year court battle with the Natural Gas Pipeline Co. of America. Complaint: noise and pollution from a natural gas compressor station near Howland, TX. Award: $1,242,500 in damages. But remember it took eleven years of blood sweat and tears to get there. How many Americans are going to have the wherewithal to do that? William "Bubba" Justiss, who brought the suit, said,

I was tickled to death by the verdict, I never did think it would happen. I didn't think it would ever come to trial. I am glad it did. It might help some other people on down the way.

All the years he was fighting this uphill battle, he said,

I cried every time I got up to speak to people at meetings. I was trying to warn people what will happen when these compression stations are built, the amount of problems residents will have and the devaluation of their property.

Landowners often complain about noise levels associated with natural gas compressors. The noise level varies with the size of the compressor and distance from the compressor; and it changes with shifts in wind direction and intensity. According to the Powder River Basin Resource Council, "Depending on the wind direction, the roar of a field compressor can be heard three to four miles from the site. Near the compressor stations, people need to shout to make themselves heard over the sound of the engines."

One Wyoming landowner has described compressor noise in this way:

"....the dreadful noise generated by a nearby large compressor station. Noise that was so loud that our dog was too frightened to go outside to do his business without a lot of coaxing. Noise that sounds like a jet plane circling over your house for 24 hours a day. Noise that is constant. Noise that drives people to the breaking point. My neighbor called the sheriff, state officials and even the governor and was told nothing could be done about the noise. Like I said, the noise drives people to the breaking point, and my neighbor fired 17 rifle shots toward the station."
(This comment comes from Earthworks: Click here.)

How many thousands of people will be pushed to the breaking point before this is over? Perhaps it will be you or I. This is just one more reason to strengthen our gun laws. Arming everyone could be a very bad thing. Our very lives, our families, our planet are threatened. How much can we take?
DEMAND ACCOUNTABILITY!
Posted by Peacegirl at 2:26 PM

Oh the compression stations are a force to be reckoned with. Not just the noise factor, which can be as maddening as anything. They also put off alot of propylene Glycol, yeah the same stuff you find in shampoo, toothpaste, icecream, almost anything. they also are have the benzene factor going on much less if they are funning those wonderful diesel engines. jaime
Northern Michigan

We have an East Ohio Dominion Compressor station next to us. They expanded and added a tennessee station and another East Ohio Dominion station. Life has been poor at best since. It absolutely sounds just like a commercial airliner circling our house and it vibrates as if a train was comming at us. Our windows actually shake. My dog is also too scared to come out on bad days. It has changed the migratory pattern of birds here as well as made us as insane and frustrated as one could get. They have caused us to loose so much property value we can't afford to move, let alone finding someone who isn't bothered by it. They have ruined our lives and have shown only nefarious behavior to elude doing anything to protect us from it. We need laws to protect us, or force them to be accountable. Something has to be done!

I am a native of Woodhull and familiar with the area. It has been nearly 50 years since there was a Pultney School or other schools in the area of the pump station. The region is served by a central school 10 miles away!

Non-auditory Effects of Noise on Children:
A Critical Review
by professors at Cornell University and Carnegie-Mellon.

I'm in the Fayetteville Shale in North Central Arkansas. Just got back from a talk by Calvin Tillman, the Mayor of Dish,TX.
baddish.blogspot.com

He warned us that this is coming our way and we can expect anywhere from 50 to 100 of these scattered around.

They demanded and got after much media exposure, noise abatement, electric motors and recirculating systems.

I'm not very familiar with these or why we have them. However, from what I understand, aren't natural gas compressors what keep our gas lines running, the ones that feed gas to our houses? There are more people in this world and we need more resources in remote places. I'm not against or for them until I do more research.