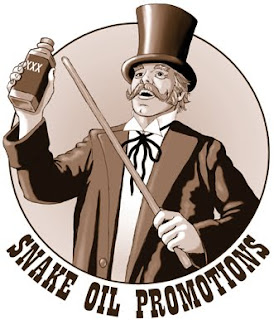 PennFuture has published an article about natural gas lobbyists who have spent more than one million dollars lobbying the PA legislature so far this year.

The natural gas lobbyists - who have spent more than $1 million lobbying the Pennsylvania legislature so far this year to avoid a severance tax on Marcellus Shale gas drilling - have a lot in common with the snake oil sales reps of old. They are making spectacular claims about the benefits of gas drilling even as they poor-mouth about economic fragility of their industry. A look at the facts makes it clear that virtually none of the lobbyists' claims are true. Our message to state legislators - Buyer beware.

The gas industry is taking the approach that they are in a delicate position right now, being as they are in their infancy. A comment in the Philadelphia Inquirer reads:

If the natural gas industry is an infant, it was born with a silver spoon in its mouth.

However, the drillers may successfully dodge the severance tax which is required in most gas producing states, and will also make "sweetheart" deals with the state to buy leases in PA state forests and parks. They will buy low now and make a killing later.

We weren't born yesterday. All of us should let the legislature and the governor (Rendell) know that this is a very bad deal all around.

important post peacegirl!
people in pennsylvania need to write to their state reps and to gov. rendell as well, and insist on taxing big gas! drilers have increased our population and the crime rate in our town has gone up significantly. our police chief says not one, but TWO additional officers are needed to maintain peace and protect our residents. where's that money come from? it's taxpayers who foot the bill, and without a severance tax, the gas industry that contributes to the need for these additional expenses will not be contributing to the solutions...