Pipelines Are Not Our Friends 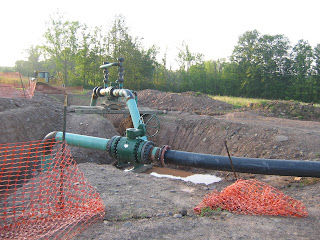 A pipeline is installed at the Otten well in Bradford County, PA. The high part will be above ground.

Just a few weeks ago (May 2009) an explosion occurred in a home in Irving, Texas. State regulators blamed the blast on a natural gas leak. Atmos Energy is being held responsible for the incident which demolished the house and severely injured its owner who suffered third degree burns. Not surprisingly, Atmos says it is not at fault. The Texas Railroad Commission, the agency which regulates the natural gas industry, says the culprit was a compression coupling joining two natural gas pipes under the street. Apparently elasticity of the rubber gaskets holding the pipes together deteriorates over time, perhaps 45 years or more. The rubber contracts after being in service for a number of years. Investigations into other similar explosions also have revealed improperly manufactured fittings. An Atmos operations manager testified the couplings, called NORMAC couplings, are known to leak. This problem has been known to pipeline technicians for decades. There are an estimated 800,000 aging compression couplings still in the ground. Small leaks are not necessarily reportable by federal safety standards. Yet some call these couplings "ticking time bombs." The Railroad Commission still has not taken steps to have faulty couplings removed, although the agency does have a standing order to have them removed if they are discovered. Atmos officials have declined an interview with a local TV station, News 8.

Has the American public gotten so used to natural gas use and the pipelines buried underground that the dangers are not taken into account? The deterioration and corrosion of pipelines take place underground where no one can detect problems until it is too late in some cases. Now we face massive new pipeline networks going in to get the so-called shale gas to market. These pipelines are often buried very close to homes, schools, and playgrounds. Land owners get a small fee for rights-of-way. Is it worth the money?

DEMAND ACCOUNTABILITY!
SAY NO TO PIPELINES NEAR YOUR HOUSE!
Posted by Peacegirl at 5:49 PM