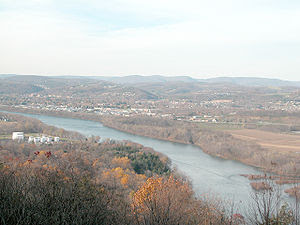 A discharge permit for a gas well wastewater treament plant on the West Branch of the Susquehanna River has been published by the PA DEP. It was published on May 2, 2009, for a 30-day public comment period. The permit is the first for the DEP. Northcentral Regional Director Robert Yowell said:

The permit would allow between 54,412 and 522,245 pounds per day of total dissolved solids to be discharged to the river. A maximum of 400,000 gallons a day of typical well-drilling wastewater would be treated and discharged from a facility to be constructed on the Water Tower Square property in Williamsport. Ten more permits are in the works for the West Branch of the river, all of which will be published by the end of June 2009.

An article in the Williamsport newspaper, The Sun-Gazette, reports:

In the meantime, the river's assimilative capacity - its ability to take in toxic materials without harming aquatic life or humans who consume the water - will be divided among 10 proposed dischargers, including Terra-Aqua Resource Management LLC."

Discharging treated frac water into the river is a troubling proposition. Will the treatment process remove all toxins? Doesn't the phrase "assimilative capacity" mean that it will be acceptable to pollute the river as long as the fish don't die or develop tumors and people don't get sick after swimming in the water?

The little narrative superimposed on the scenic photo above is quite touching. If you read between the lines though, it appears that the writer does not actually live in the area, but vacations there. I would conclude that the writer leaves the dirty city to commune with nature where we live. The writer probably has a nice lucrative job in the city, doing unknown damage to the earth or to humanity, and then escapes to God's country to unwind. Maybe that writer should just stay in the city and let the people who actually live here decide for ourselves what we should do. Sorry about the view while you drive to your little getaway, you carpetbagging, limousine liberal. The gas drilling is providing a much needed cash infusion to our regional economy. We choose to live here and try to make a living. You make your fortune elsewhere and them come here and try to push us around. Go back to the city!

Hold on a minute! The article above is guilty of bad math. The stated DEP permit limit for dissolved solids is 500 PPM. The stated flow is 400,000 gpd. 500 PPM = 500 lbs of solids/million lbs of water. Using the coversion factor of 8.34 lbs water/gallon water, and multiplying it out you get 0.00417 lbs TDS per gallon of water. Then multiplying that by 400,000 gpd, you get 1668 pounds per day - not the numbers cited in the article. Now take that into a typical dry weather discharge of 500 cubic feet per second in the West Branch, this loading would create a net concentration of 0.6 PPM of total dissolved solids in the river. The EPA allows a total of 500 PPM of TDS in DRINKING WATER. So the proposed discharge would be 833 times cleaner than drinking water. You tree huggers have big hearts but small brains.