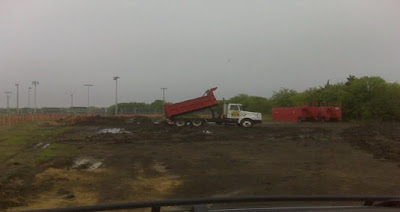 Construction of a gas well pad has already begun in the city of Mansfield, Texas, right next to a youth playing field. The City Council voted on May 3, 2009, to proceed to the second reading of the proposal to allow the gas well to be drilled within feet of where children play soccer. The vote was 6-1 in favor. The Council will be required to read and vote on this proposal two more times before it is finally approved. Concerned citizens of Mansfield are asking people to speak up and speak out against this plan. The administrator of the blog Protect Mansfield writes,

They are building an actual road EXACTLY where the current temporary one is laid… WAY too close to homes and still utilizing current park infrastructure for their entrance and exit from the well site. The location of the pad is as documented… VERY close to both sets of youth athletic fields. The frac pound will be on the other side of the park. This basically means the entire park will be an industrial zone due to the traffic to and from the well to the pond. You can talk about how clean their sites are, and I'm sure they do what they can to make them more aesthetically palatable to the general public.. but this is a PUBLIC PARK WHERE KIDS PLAY SPORTS.

The request of XTO for a Special Use Permit to drill 20 natural gas wells over a 5-year period inside the Mansfield Sports Complex was put forth at an April 28th City Council meeting. Over 75 concerned citizens showed up to protest. They expressed their concerns regarding the drilling itself and the presence of heavy industrial vehicles. The remarks of these residents were characterized as fear-mongering by Tim McCann, who is, perhaps surprisingly, the President of the Mansfield Soccer Association. McCann spoke vigorously in favor of the permit.

It is no secret that hydrofracking a gas well is a very toxic procedure, affecting the air, the soil, and many times the water. A well pad brings with it, not only negative health issues, but also noise pollution, dangerous traffic problems, and a very real possibility of explosions. Why would any municipality even consider for a moment allowing such a gas well to be placed next to a public park?

See pictures here. The close proximity of the well pad site and the playing fields is shocking.

Another meeting of the City Council was held May 11th.

DEMAND ACCOUNTABILITY!
Posted by Peacegirl at 11:22 AM

news like this is so sad, but sadly, not shocking.
what has happened to our collective conscience that we can care so little about the health and safety of our children... of Life Itself, that we can be tempted to set hell on earth down beside a playground!
we can only hope that your reports will make a strong impression on people's hearts and minds and that they will gather the support necessary to prevent this kind of madness from becoming an overpowering reality!
bravo peacegirl!!! you've built a gently potent source of news, information and excellent commentary!
thank you in the name of sanity...