Seismic Testing Could Cause Hidden Problems 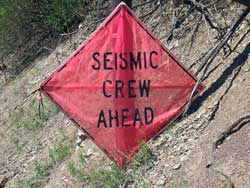 The manager of the Bradford County (PA) Sanitation Committee (BCSC), Mary Neiley, warns land owners to communicate with gas companies and let them know where their sewer is located. Tell them to keep their distance. She says there is no feedback yet about how seismic testing might cause damage to sewer systems. To repair or replace a damaged sewer system will cost between $6,000 and $20,000. What's more, it might be hard to prove that damage was caused by seismic testing, and it might take months for a problem to surface in the first place.

I would personally bet that it would be virtually impossible to prevail in a lawsuit about damage caused by seismic testing.

What would be considered a "safe" distance from the septic system or well for this testing?

There are some seismic companies that are very careful of their work. They study the area very well before getting into some drilling or so. This is to conduct safety precautions for the people or community in the vicinity. A seismic company should uphold to its mission to protect the health of the people to avoid hazards in certain areas.