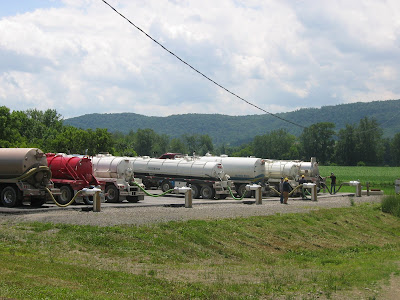 Water extraction facility in Ulster, PA.   These trucks are sucking up the water from the Susquehanna River.
Photo credit:  Carol Manuel
Letter to the Editor, Aug. 29, 2010
Published: August 29, 2010 (The Towanda Daily Review)

Loss of one resource for another?

EDITOR: Being a licensed Pennsylvania water well driller for the past 40 years and being born and raised in the Towanda area, I feel I must respond to the stories I keep reading about the gas drilling companies shifting the blame of water well problems to poor well construction and local water well drilling.

One such story was in this week's Sunday Review (Aug. 22, 2010). And before I begin I want it known that any subsequent mention of the Chesapeake company shows no hostility towards them or their representatives. With mutual respect and dual acknowledgement of experience, I do believe that natural gas extraction and water well drilling can harmoniously coincide in Northeast Pennsylvania.

First of all, if a water well is not constructed properly, there are problems from day one and not 10, 20 even 50 years later. Referring to Sunday's article, Brian Grove of Chesapeake stated he does not believe, the facts, implicate its drilling operations is causing the water issues at hand. We have not spoken with any of the Paradise Road residents, but, the fact is, we have recently received many calls from local homeowners regarding disturbances in their water wells that began after nearby gas drilling activity had started. It doesn't take a rocket scientist to recognize the time line coincidence and figure out gas drilling activity probably has caused these water well issues.

Again referring to the Sunday article, Mr. Grove wrote, affected water wells are drilled into shallow aquifers. Most of our calls pertain to rock wells, but our answer to his comment is, this is Pennsylvania, not Texas! In many local areas, residents depend on the shallow aquifers because the deeper water is salty, or sulfury, and not compatible to human consumption. What a shame to disturb their only potable water resource.

And Mr. Grove's insinuation that poor water well construction could be causing current water well issues is a direct disrespect to me, my father before me, and other local reputable water well drillers. Speaking for myself and my father's memory, we have drilled thousands of water wells during decades of business in Northeast Pennsylvania. Our continued good reputation is testimony that we do successfully construct quality water wells. I invite Mr. Grove to call me to discuss well construction but not to come into my hometown and discredit my work. Mr. Grove stated that Chesapeake has offered to drill replacement water wells of "superior construction standards." A recent telephone conversation with Chesapeake representative Larry Wooten makes me question what he means by "superior construction standards?"

Mr. Wooten called in regards to me drilling a replacement well on my neighbor's property. He quizzed me about my practices and prices. When I told him I use a steel drive shoe on the bottom of my casing to seal contaminates from entering the well, he told me they never use them and thought this contaminant seal was an unnecessary added cost. Again, this is Pennsylvania, not Texas. I believe embedding a steel drive shoe into rock formations is necessary to superiorly construct a Pennsylvania water well.

To end, we believe Northeast Pennsylvania is both blessed and cursed by the Marcellus Shale mineral deposits which lie underneath our homes. The excitement of gas lease funding and large drilling rigs coming to our area has been replaced by damaged roads; delayed travel and traffic snarls; streams sucked dry by convoys of trucks, driven by persons foreign to our area, who may skillfully drive Texas flatlands but have difficulty maneuvering our hilly serpentine roadways; residential sweet water invaded by methane that is blowing off well caps; local families displaced by gas workers; and other changes affecting our work and lifestyles.

Unlike cautious New York state, we think Pennsylvania jumped the gun and has allowed natural gas drilling companies into our area too soon, in too large of numbers, and with too few regulations in place. The saying, you don't know the worth of the water until the well is dry, sounds like a reality to us. Our drinking water is being affected and millions of gallons of water are being extracted from our streams, rivers and municipal wells with insufficient recharge. Well, Sen. Casey, we agree it is high time to protect our water, our people and our future.

The letter can be viewed as it appeared in the Towanda Daily Review here.
Posted by Peacegirl at 10:37 AM