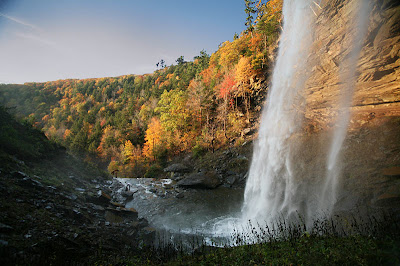 Catskills waterfall
At a recent showing of Josh Fox's award-winning documentary, "Gasland,"  people had two questions on their minds:  Is the risk [from gas drilling] worth the reward?  What's the alternative?  This New York Times article by Peter Applebome portrays a fair and balanced view of the issues which are being debated. It is worth reading.  Laurie Spaeth of the Chenango Delaware Otsego Gas Drilling Opposition Group (http://www.un-naturalgas.org/) said, "As impressive as the technology is, there are going to be accidents.  What they're doing here is not quite as extreme as what they were doing in the gulf [of Mexico], but it clearly has the same potential for devastation."
Read the whole article here.
Posted by Peacegirl at 12:39 AM