Our Water Is In Danger In Pennsylvania 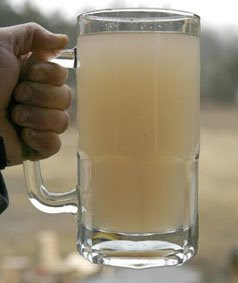 A glass of water from a well in Dimock, Pennsylvania

Our friends who live along the Delaware River from New York to Philadelphia need our support. They are more and more concerned about their drinking water. Gas drilling has begun along the banks of the Delaware River. Mark Barbash from Center City said:

The major problem that comes from all this drilling is the fact that we will not have drinking water because you cannot filter this stuff out. That means that 72 million people in the northeastern United States are close to not having any drinking water.

Do we really know what it would mean if we had NO DRINKING WATER? None! We have never had to think about such a thing. Would it not bring our lives to a complete standstill?

I once experienced a 4-day period with no electricity after a hurricane. It transforms your life into a survival mode. Nothing gets done except the bare essentials of living.

The Delaware River Basin Commission will hold meetings on the process on September 23rd and October 22nd. Citizens of the affected area are asking for an Environmental Impact Statement BEFORE any drilling begins. However, if this goes according to the current trends, the gas drilling industry seems to be notorious for doing things backwards.

Drill now; apologize later. Fines? Bring 'em on. We've got money for that in the budget.

The natural gas industry got a big headstart in lining up landowners and getting leases signed well in advance. This makes everything hard for citizens to protest. However, if enough people find out the truth, if enough people learn about what is about to happen to them and the planet if things don't change, then maybe there is a lot we can do to stop the destruction. I hope so.

Read the article in full here.

DEMAND ACCOUNTABILITY!
CLEAN DRINKING WATER IS A HUMAN RIGHT!
Posted by Peacegirl at 11:54 AM

That pictire is truly disconcerting. Looks like diluted soy milk.

This is really upset!! we can not support all the companies that drilling ever day and are producing all this pollution on the water. our communities must be clean.