McLinko Is Not Our Friend 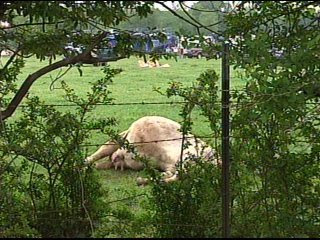 (A dead cow lies in a Louisiana pasture, a victim of drinking contaminated water near a well pad)

On June 18, 2009 a letter to the editor entitled “Mind Boggling” by Christopher Bradley was printed in the Rocket-Courier attacking the nascent natural gas industry in Bradford County and the positive effects it will have on our economy during the nationwide recession.

Mr. Bradley and I have a fundamental difference of opinion on government’s role in the local economy; I believe in free markets and private enterprise while the writer takes the side of big government. I generally avoid responding to these letters, but Mr. Bradley was so inaccurate, inarticulate and invidious, that I will make an exception.

Bradley’s assertion that I am “lobbying for the gas companies in order to line my own pockets,” is a serious matter. Absent some hard evidence, it’s also malicious.

Clearing up misinformation is a day-to-day task in this new industry in our county. The gas companies have not confiscated land through eminent domain. Rather, contracts between landowners and gas companies were signed allowing drilling on their private property for a lease payment and future royalties. Even local and state governments have entered into these agreements. [Sadly!] In fact, by a unanimous vote, this current board of commissioners leased county land and a right-of-way for pipeline across a remote part of Mt. Pisgah for just under $2.5 million. [Tragically!]

As your county commissioner, I realize the economic benefit [for the few] and job opportunities [except many of the workers are brought in from elsewhere] that will occur as a result of the drilling activity in Bradford County. I also support constructive regulation of the industry to ensure our environment, infrastructure and water are protected. [except the drilling industry is not regulated by the EPA, nor is it subject to the Safe Drinking Water Act or the Clean Water Act]

Bradley took issue with a statement I made recently in response to Gov. Rendell’s proposal to tax landowners in the Marcellus Shale region and divert the money to Philadelphia. I wrote, “If you believe in agriculture preservation and preserving the family farm, this gas play has done more than any government program could ever do.” Bradley responded to my statement by listing a bucket full of government services, but never addressed the fact that Bradford County’s family farmers are struggling to pay their bills while milk prices hover around prices that were seen in the 1970s.

The Farm Bureau and extension offices provide valuable services, but they cannot provide the financial support necessary to keep the family farm afloat in this economy. I invite Mr. Bradley to attend a local Farm Bureau meeting with me and see for himself how lease payments and royalties can save family farms throughout Bradford County.

It’s obvious that Mr. Bradley has never spent time on a farm. He makes the ludicrous statement that drilling activity on farmland will leave it fallow and shut down agriculture in the county.

While a small fraction of land in the drill unit will be utilized during the drilling process, the vast majority of land in the parcel is left untouched and agriculture production is not affected. [McLinko]

[Gas drilling contaminates the air, soil, and often water. It requires the cutting down of many trees to put in access roads. It necessitates the disruption of farmland to make room for well pads, compressor stations, waste water treatment plants, pits for water and fracking fluid, and water pumping stations. Farm animals die from drinking contaminated water in pastures. Land transformed for industrial use by hydrofracking cannot be reverted back to arable land.]

Mr. Bradley states drilling companies will use “heavy equipment that is not easy on the land.” Perhaps he does not realize heavy equipment has been used on the family farm for the past century. Since the advent of heavy equipment, farmland has remained fertile and in fact, crop yields have increased.

I have spent a lot of time researching the natural gas industry and am well aware of both the benefits and drawbacks the activity will have in our county. After traveling to Wise County, Texas with a delegation from Bradford County, I returned back to Wise County on my own dime to further explore the industry’s impact on the region. [McLinko]

[According to a report from a Wise County resident, Mr. McLinko did not meet with people in Wise County who have suffered serious ill effects from gas drilling, even though they had graciously arranged for such a meeting while the Bradford County group was in the area last fall. Why did Mr. McLinko choose not to find out the drawbacks of gas drilling? Or if he did, why did he not report them?]

Locally, I have brought representatives from the industry to answer questions posed in open forums by local officials and concerned citizens. The most important action that I can take as a county commissioner is to open up a dialogue between county residents and the industry. Education is key to ensuring the county benefits from this opportunity. We must maximize all opportunities economically as a county while ensuring the protection of our environment and respecting our rural heritage. I encourage Mr. Bradley to join me in this effort.

Dear Readers,
Does anyone expect an industry representative to mention negative effects of gas drilling? An open forum presenting one side of an issue is hardly adequate. If Commissioner McLinko were interested in dialogue, he would involve more than just industry people here or in TX, all of whom stand to make a lot of money and cannot be objective. The economic advantages of gas drilling will be great for a few "lucky" landowners and a lot of industry people, but the real costs of increased need for fire protection, emergency medical staff, drug counselors, road repair, insurance cost increases, work force drain (resulting in local businesses suffering), legal fees for the inevitable litigation, medical costs from the illnesses that will occur from air, soil, and water pollution, loss of livestock and farmland for growing crops, loss of recreational areas which will no longer be safe or desirable, loss of hunting and fishing areas, all these things will take an enormous toll on Bradford County residents. Gas drilling will cost a lot of money. 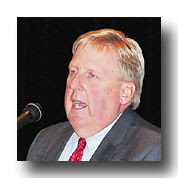 Doug McKlinko, Bradford County Commissioner
Does he speak for the local residents?


[Red print is editorial commentary, not the words of Mr. McLinko!]

Thanks to Christopher Bradley for writing an excellent Letter to the Editor (Towanda Daily Review). Read it here.

Posted by Peacegirl at 4:46 PM