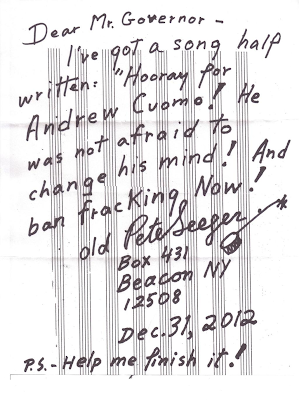 Folk music legend Pete Seeger is trying to form an unlikely musical alliance with Gov. Andrew Cuomo. "Dear Mr. Governor, I've got a song half written," Seeger, a longtime Fishkill resident, scrawled on a piece of blank sheet music paper, proposing the two make some sweet music together with a new song about banning hydraulic fracturing, or fracking.

Hudson River Sloop Clearwater, a nonprofit group founded by Seeger in 1966, tweeted a photo of the note on Friday, the final day in the public comment period on fracking. Cuomo is weighing whether to allow shale gas drilling using high-volume fracking in the state, as state regulators near completion of a 4-and-a-half-year environmental review. Seeger is an outspoken fracking opponent. The note was not the long-time environmentalist's only attempt at making his stance known to the governor. He performed at an anti-fracking rally before the State of the State address in Albany on Wednesday. No word yet on whether Cuomo - or his speechwriters - are planning to help Seeger with his writer's block.
Posted by Peacegirl at 10:02 PM

Pete Seeger- I hope his song will have a happy ending!