Natural Gas Drilling in NEPA: Sadly, This Is How Ordinary Landowners Think 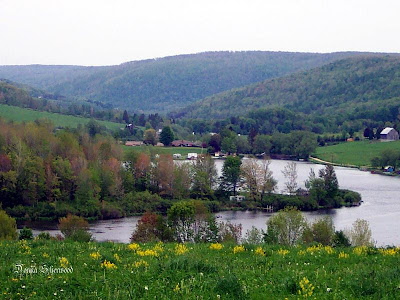 Dushore, Pennsylvania
If someone came to your door and offered to make you a rich person, would you be interested?  Of course.  Even if it meant making a pact with the Devil himself I suppose.  Read the story of one Pennsylvania man, Richard Kriel, who finally succumbed to the pressure of a landman and signed away his 60 acres of land to a gas company.  He is now excited about the prospects of getting what he calls "free money."   The negative consequences of his decision will undoubtedly be revealed as time goes on, but he says he is willing to take the bitter with the better. He said he was given an offer "he couldn't refuse." Mr. Kriel also said:


The last thing I want to see is the water messed up and the fish to die. I don't want to see that.

There is little hope that his wish for everything to go on without a hitch- without a high cost to his environment, his land, and his family- will be a possibility, but I hope he can be the one or two few exceptions. Time will tell. Perhaps Mr. Kriel's dream will come true. He said:

I see it as a potential gold mine.

And I say- I see it as a potential disaster.  Here are some serious incidents that have happened in PA in the last few years.  Does the money seem worth it when you put yourself in danger or possible death?  If something happens, it is a 100% disaster for everyone involved.  There is no such thing as getting back good water after a well or spring is contaminated.  Some things can't be fixed.  A million dollars will not help.

Read the article from the Sun Gazette here.