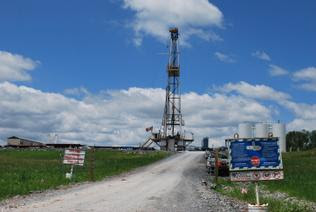 The Trouble With “Drill, Baby, Drill”

I’m not looking to host a debate about whether or not the US should do more to encourage drilling here in America.

On one side, we have the oilmen, who would look to drill enough holes to turn the entire continent into a block of Jarlsberg cheese. On the other side, there are the treehuggers who are so wrapped up in their ideology that the dangers of foreign oil dependence is entirely beyond their comprehension. My personal opinion is that the right path, as usual, lies somewhere in the middle.

That said, ProPublica gives us reason for concern today…

Pennsylvania residents whose streams and fields have been damaged by toxic spills and whose drinking water has allegedly been contaminated by drilling for natural gas are suing the Houston-based energy company that drilled the wells. A worker at the company is among the 15 families bringing suit.

The civil case, filed Thursday in U.S District Court in Scranton, Pa., seeks to stop future drilling in the Marcellus Shale by Cabot Oil and Gas near the town of Dimock.

Cabot is a public company, and is one of many natural gas and oil concerns currently converging on Pennsylvania’s natural gas-rich Marcellus Shale. This is a development that could impede future projects in this and other shales should the story happen to go national.

Posted by Peacegirl at 3:49 PM

IMPORTANT POST!
Particularly as Cabot expresses NO responsibility for what's happened and seems to feel totally wronged by the lawsuit. It's a major insanity of our regulatory agencies that this kind of attitude can stand up shamelessly in front of ANYONE... and be allowed for any kind of consideration. What is our society coming to??? It's frightening.

As Reuters has picked this story up...it's gone international at this point.