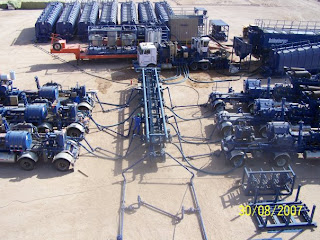 Update: Read the latest report on the Schlumberger Horseheads, NY, facility which has now been approved inspite of strong opposition from many local residents. The public hearings seem to have been for naught.

Gas industry people are very intelligent shrewd. They hire people to deal with the public. There are employees, landmen, whose job it is to get the most land leased for the least amount of money. And then there are employees who go out into the community to build trust and confidence pacify and intimidate people into thinking that everything will work out and every effort is being made to protect them and the environment. This approach is very effective. Most citizens and landowners want to believe this fantasy, and that is why the gas industry can succeed so easily in getting them to go home feeling pretty good about the gas wells near or on their land. It helps that most of us still think that the regulatory laws and agencies are certainly not going to allow our lives to be ruined by pollution, contamination, illness, and death. How many people know that Pennsylvania and New York have fewer than 20 inspectors to oversee ALL aspects of the drilling industry? How many people realize that the gas industry is STILL exempt from the Safe Drinking Water Act, The Clean Air Act, and many other environmental laws?

Now the big news in Horseheads, NY, is the huge $30 million facility Schlumberger plans to build in their town. This Texas corporation provides services and materials to oil and natural gas producers robbers. They intend to supply drilling sites within a 300-mile radius, primarily in Pennsylvania's Northern Tier. The proposed Horseheads facility would become the company's North American headquarters. The buildings would be 400,000 square feet and require 90 acres of land. The gas industry gobbles up much more than just a few acres for a well pad here and there. Does Horseheads really want to give up 90 acres of good land for such a purpose as this? Stephen Harris, spokesperson for Schlumberger, says the upcoming public meeting in Horseheads will give the local citizens a chance to ask questions and perhaps express their concerns.

The purpose is to open up to local residents to give them the opportunity to answer some of the concerns that come up at town hall meetings...We hope to give people a better sense of who we are, why we chose Horseheads and what kind of corporate neighbor we hope to be. We want to open up the dialogue on a more informal level. What we'll have are different stations on key issues. If you have a concern about traffic or storm water drainage, we'll have different stations residents can come to to get information.

Perhaps they'll have a little basket of toy Schlumberger trucks for the kids to take home and play with.

And what will be happening at this facility in the Holding Point industrial park in Horseheads? Fueling, washing and maintenance areas for a fleet of trucks which service drilling sites, as well as storage areas for materials toxic chemicals used at those locations. I can just picture this. What a nightmare for Horseheads! I hope the citizens will stand firm and deny whatever permits are required for this facility to be built. But, if not Horseheads, where will Schlumberger go next, looking for a place to put this monstrosity? It will ultimately go somewhere.

To find out about a Schlumberger open house in Horseheads, NY, this Thursday, September 3, click here.

Read about an August 11th public meeting in Horseheads here.

For your information and just so you know, when you talk about Schlumberger, it is pronounced SCHLUM-BEAR-ZHAY! It rhymes with lingerie!

DEMAND ACCOUNTABILITY!
NO SCHLUMBERGER FACILITY IN HORSEHEADS!
JUST SAY NO!
Posted by Peacegirl at 8:25 PM

I agree! It is very hard to look at one of those huge trucks or machinery with the Schlumberger name on it and still be able to pronounce Schlumberger in that French-sounding way. It reminds me of pronouncing Target as "Tar-zhay!" Rather affected! And meant to be somewhat of a joke, of course!

What toxic chemicals are being used when they drill? Could you please list them? Another question, how does drilling for natural gas cause air pollution?, when the Marcellus formation isn't drilled on air due to the low density matrix that the Marcellus consists of along with the formation pressure, they have to use drilling mud to hold back the formation.

While none of us appreciate pollution, there are even fewer of us who want to live without modern conveniences such as hot water, electricity, a warm home when it is -10, etc. The industry, while not perfect, polices itself very well and understands its accountability to the public. Natural gas is a very clean source of energy. Done right, the Horseheads facility will help bring jobs, prosperity, and clean energy to residents of the NorthEast.

anywhere you see a comment from 'Anonymous' just insert 'paid industry shill' - it's the same thing.

for all you who think the gas drilling is bad know this, the fewer the jobs in our area means crime rate will increase meaning your taxes sky rocket, and our government is only getting richer by the second and todays youth has no intrest in joining the military so the more jobs the better, remember the next time u see a cop car hauling someone away that gas came out of your paycheck and that meal an inmate gets 3 times a day u pay for, so lets build our economy and keep snotnose punks off the streets and more money in ur check every week, the more we pay in taxes the more we struggle

Schlumberger will bring atleast 100 jobs, and with all the 3rd party companies it uses there will be hundreds more. This will be a blessing to the area. Gas wells do not bring crime, they bring jobs and hundreds of thousands dollars to a community.

I hope it all works out for you, Anonymous. Hope the jobs come and the huge amounts of money, too. And I hope you have safe water to drink and cook with.