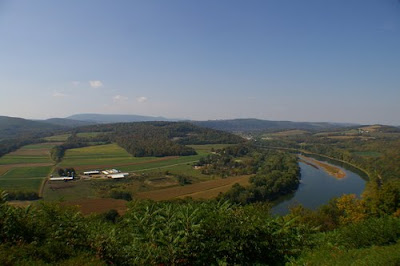 Our Dear Susquehanna
A workshop was held yesterday, July 20, in Tioga County, N.Y., to explain and receive input on a real-time water quality monitoring network that is now expanding into the Southern Tier Region of New York.  The Susquehanna River Basin Commission recently opened a new satellite office in Athens Township, PA.  The office is staffed by individuals working to monitor and enforce compliance with laws that protect water resources in the Susquehanna River Basin which includes areas of New York, Pennsylvania, and Maryland.

The demand for water from smaller rivers and streams is steadily increasing, mostly due to the natural gas industry, so this issue of water extraction is a serious one.  Gas drilling corporations pay an application fee and then a fee of $0.20 per thousand gallons of water up to a limit of two million gallons per day. I'm not a math wizard, but I think that comes out to $400 per day.  I am assuming that any and all gas drillers who want water can take that amount daily.  Other energy production companies are allowed much more water.   For example, the nuclear power plant in Berwick, PA, is allowed to take 40 million gallons every day.  The operation doesn't use that much, but they could.

I think it is important to bear in mind that water stolen taken from our rivers and streams for the purpose of drilling and hydrofracking is water that will never be returned to us in usuable form.  It is transformed into toxic waste.  Much of it never comes to the surface again, but remains deep inside the earth still laden with toxic chemicals which can and do migrate in unpredictable ways to unpredicatable places, including precious watersheds.

Read the whole article from the Towanda Daily Review here.


DEMAND ACCOUNTABILITY!
WATER IS PRECIOUS
WE CANNOT DRINK GAS
Posted by Peacegirl at 11:01 AM