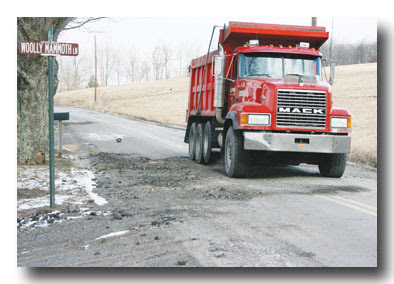 Four truck drivers were fined and jailed on Wednesday, February 3rd, in Towanda PA. They were charged with driving with invalid permits. The state police alos found "numerous safety, permit and load securement violations." The trucks were impounded. The drivers, unable to post bond, were sent to the Bradford County Correctional Facility. They work for T. K. Stanley, Inc., of Waynesboro, Mississippi.

Some observations: None of the truck drivers were from the local area. Weren't at least the truck driving jobs supposed to go to locals? The company trucks were being operated without the proper permits, and they were probably way over the limit for tonnage. I have personally seen these huge trucks driving way over the speed limit on these narrow back roads. They can scare the living daylights out of us ordinary people. I've been nearly driven off into the ditch a couple of times. And lastly, everyone probably realizes that these violations go on every single day. And we can see the roads going to pot, literally. We also know, do we not, that there aren't enough inspectors or state police to monitor all the roads of Bradford County. So the gas drillers can just go on as usual, knowing that there will be a few fines here and there, but for the most part, they don't have to really worry about it. Why should they?

Read this article from pressconnects.com.

BULL'S EYE!
Unfortunately, your points are so on the mark... These big lawless trucks are just one more way our area is being violated by an industry without scruples, ethics, conscience... the qualities that civilize us.
Good post peacegirl!