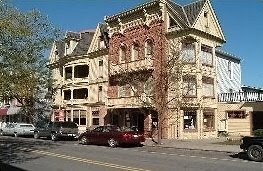 The Wyalusing (PA) Borough Council monthly meeting last month opened with a presentation by Anson Belcort of Mason Dixon Energy. His company is busy securing agreements with local landowners to install a gas pipeline for Chesapeake Appalachia. It will run right through Wyalusing Township. However, there was a problem, Belcort said. They need about 12 miles of pipeline, and one landowner was dragging his feet. Pipelines need 50-60 feet width. (The pipe is buried 3-5 feet, or beneath the frostline.)

We've got a deadline, said Belcourt. If we had you guys signed up, we could go ahead and go around Chadwick.

When asked if there was big problem with negotiations, Belcourt assured the Council that there was no big issue or concern with the private landowner. It was just a matter of timing. Mason Dixon needed the right of way right away! Several members of the Council, including President George Anderson, were prepared to vote yes, but toward the end of the meeting before a vote could be taken, Mayor Joan Cashin cautioned the group:

Doing this without consultation with an attorney is, I think, irresponsible.

It was agreed that an attorney should be consulted.

Hats off to the Wyalusing Borough Council for exercising caution rather than giving the gas industry the green light. There are things that local governing bodies can do to at least slow down the process. This is not just an effort to make trouble. It is the smart, responsible thing to do when so much is at stake for local citizens. It is their environment, health, and well-being that may hang in the balance. The gas companies don't live in Wyalusing.

ASK QUESTIONS! TAKE ALL THE TIME YOU NEED!
DEMAND ACCOUNTABILITY!
Posted by Peacegirl at 6:10 PM

I think Joan Cashin is wise beyond her years and should run for County Commissioner!!