Family Matters: Is Signing a Gas Lease Worth It? 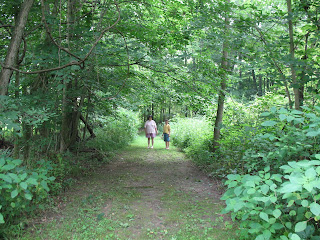 Walking down our path to the Susquehanna River, French Azilum, PA. Our family's sacred spot since 1930.


Families are being stressed by the gas drilling industry, some almost to the breaking point. This serious effect of natural gas wells is not getting much press. I can tell you from personal experience that, in my case, a major rift has occurred in my family in the last year because of controversy surrounding our options. Should we sign a lease or not? That is the question. Here is an excerpt from a recent article in pressconnects.com of Greater Binghamton:

Not for Pennsylvania landowner Wayne Smith. He told Reuters recently that he regrets the $1 million in royalties he earned over three years from drilling on his land. Smith says his blood has elevated iron levels, his drinking water is tainted, and four cattle have died from drinking contaminated water.

Then there's Stephanie Hallowich and her husband, Chris, who moved with their two children from suburban Pittsburgh to enjoy rural life in Hickory, Pa. Now they are hemmed in by four gas wells, a three-acre reservoir containing water for drilling, a liquid extraction plant, and a gas compressor station. Hallowich would like to relocate because of noise and health concerns but can't imagine that anyone would buy their home.

Hello Jennifer - Tough decision about drilling for your family, the lure of easy money is strong, even though landmen can't say how much your royalties will actually be. Remember that most things that sound too good to be true usually aren't true.
I look back over the last 2 weeks around Hickory and Pittsburgh, oily-looking stream pollution from one spill by Red Oak cleaned up by Weavertown Environmental. That story never made the news, hence industry-types can continue to falsely brag that there are no documented cases of drinking water pollution -- Get Real! These streams run into the rivers where Pennsylvanians get their drinking water.

Ms. Tomsey,
If you are asking advice - don't sign! We didn't. At least you can say you tried to stop the damage and put your ethics and morals above "dirty money". I have a neighbor that signed the lease some time ago and spent a lot of time trying to convince us to sign - I haven't spoken to him in quite some time because of this. He talked to my husband the other day and now wishes he didn't sign and that the drilling can be stopped. He signed in part because he was blinded by the prospect of all that money and because he wasn't aware of the damage to the environment because of the gas company's lies. Now that he is more aware he's sorry for the damage he may be a part of. It's not too late!

The writer of the article from pressconnects says she has educated her family "about the risks of the largely unregulated drilling process," but she is not sure what her family will ultimately decide. This hits home with me. I have spent a year researching the gas industry on behalf of my family, but have been shunned because of it. Most family members are apathetic or, worse, hoping to get free money in the form of royalties. The Board of Directors (we are incorporated) is not even convinced it should inform family members about potential health risks as the wells are drilled all around us. This industry is capable of breaking relationships between family members and neighbors alike. At a time when people need to come together and support one another, just the opposite can happen.

ARE YOUR FRIENDS, NEIGHBORS, AND RELATIVES NOT GETTING ALONG ANYMORE?
DON'T LET THE GAS INDUSTRY BREAK UP YOUR RELATIONSHIPS!
Posted by Peacegirl at 7:17 PM

I am going to have to become one of your followers.

Hi, Star!
Thanks for the nice comment! Visit often!

Such a sad tale.

I received a call on Sunday from a good friend who lives along the Susquehanna in Bradford County about 7 miles above French Azilum. He proceeded to tell me that a local campsite has begun to displace longtime seasonal tenants ( decades+ ) in favor of the laborers coming into town from TX, LA and other states to work for the drilling companies. He also indicated that in some cases, the campground's individual septic sytems are already becoming overloaded with the increased volume. Guess where that will end up? In the end, as you've offered so many times so eloquently...it's all about money.

Don-
This is very distressing news because just a 5-minute walk from our property there is a camp area on the river bank where fishermen and other summer tourists stay, mostly in small trailers, for extended periods of time. This camp has been there for decades. When drilling starts in earnest in French Azilum, I wonder if the owner of this camp will be tempted to do the same thing- throw out his regular loyal customers and rent (for much more money) to Chesapeake Energy and other gas companies. If that happens, I will feel less secure staying there in the area.