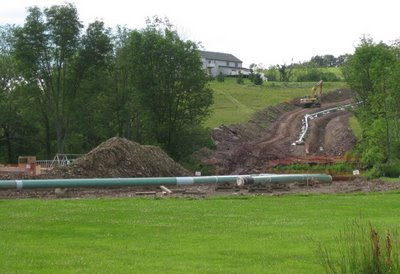 In a recent drive through parts of French Azilum Township, Bradford County, PA, I encountered this dreadful scene: Installation of gathering pipelines in the backyards of residents. Can you see the swing set? I saw the little girl who swings on that swing set. She was selling cookies to the workers who were tearing up the land right behind her house. The pipeline has since been buried five feet down and covered over, leaving a landscape of miles and miles of telltale "roads" of dirt over which I suppose grass will grow before long, giving the illusion that all is back to "normal." But is it ever going to be the same? Last Sunday in the Wise County (TX) Messenger, an article was published, telling the story of nurseryman Melvin Mitchell, who noticed something odd last Tuesday morning: mud was spurting out of the ground on his property.

As he plowed his land, he saw the fountain of mud out of the corner of his eye. As he approached, he found a pool of mud located just over a Devon gathering line.

He called Devon Energy Corporation, owner of the pipeline. Representatives came out to look the situation over. Chip Minty, media relations manager with Devon, described the problem:

The pipe that runs across Mr. Mitchell's land developed a very small hole- a hole large enough to put a toothpick through. Under pressure, enough gas leaked through from that size hole to make itself obvious.

Minty said the hole was caused by corrosion by bacteria. The area of the leak required much attention and effort to correct the problem: replacing the pipe, removing two barrels of liquid, replacing the contaminated soil, analyzing all the soil and liquids, among other things. Would that this could be a "happily ever after" kind of story. However, there is still much to be concerned about. Mr. Mitchell's son and business partner, Darin, told reporter Mandy Bourgeois that the trees on his property have been suffering and dying since 2001. He said they are dying, not from bacteria or disease, but rather from asphyxiation.

There is some kind of gas in the soil which eliminates the presence of oxygen. The tree roots grow out rather than down as they should. Darin can't sell them with confidence because the trees may not survive. Devon tested the soil in 2007 and did find problems, but the company claimed no culpability and said its operations did not cause the damage. Darin hired an independent company to test is soil in July 2008. The test revealed the presence of gas in the soil. Darin said he never dumped anything on his land or had anything leak gas in the area. He and his father have spent their adult lives in the nursery business. Never have trees died like this before they started planting on this land.

DEMAND ACCOUNTABILITY!
GROW TREES, NOT GAS WELLS!
Posted by Peacegirl at 9:44 AM