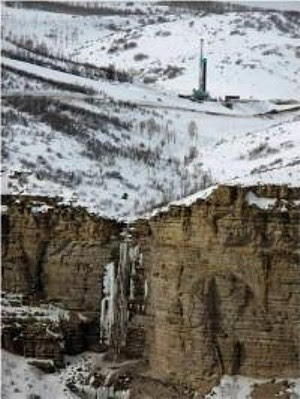 A frozen "waterfall" of drilling fluids was visible near Parachute, Colorado, in February 2008. The state says 1.6 million gallons of fracturing fluids leaked from a pit, was transported by groundwater, and ended up seeping out of the cliff. (Colorado Department of Natural Resources)

According to state records, the spill migrated underground until it seeped from a cliff side and froze into a gray pillar of ice more than 200 feet tall. When it melted, the fluids dripped into the torrid currents of Parachute Creek and finally dumped into the Colorado River.

Leaks are common on well pads. Sludge pits are one of the most common locations of leaks. Gas drilling is a very messy business. There is a huge price to pay for getting shale gas out of the earth.

Click here to read a ProPublica article published in December 2008.


[Thanks to www.un-naturalgas.org for this photo.]

Posted by Peacegirl at 9:43 PM

great post!
this photo proves unequivocally how fluids (toxic or otherwise) move underground, and how, when we are careless with dangerous materials we are potentially spreading the danger in unpredictable ways.
we're running out of excuses for allowing things that should never have happened in the first place to continue to happen. when so much is at stake, why are we so slow to acknowledge, accept and change... ?

I couldn't agree with you more. In Towanda, PA, the school board is trying to negotiate a gas lease with Chesapeake Energy in order to get royalties. Apparently the school board is not at all concerned that two gas wells have been planned for an area adjacent to school property. They are just looking for money. It is sad.

HHHMMM i don't see any of you complaining about your homes being heated, or by using the gas for your cooking. YOU ARE ALL HYPOCRITS.... and if you wanna go there I seriously doubt any of you are riding bikes everywhere you go...