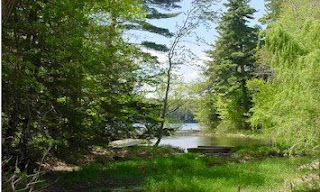 Where does one start with an article like this from PennFuture? Entitled "A Machete Instead of a Scalpel," the article describes what will happen to many good programs which stimulate the economy and enrich the lives of the people who live in or visit the state of Pennsylvania. The PA State Senate decided to slash funding from tourism funding to state forest rangers and the black fly spraying program. Here is a sampling of the cuts:

Absent from the plan is a severance tax on natural gas drilling which would bring revenue to the state- something that most other states have.
But wait!
The state wants gas drilling revenues. However, gas wells will pollute the water, soil, and air. It will make Pennsylvania a dangerous place to live or visit. It will pollute the rivers and streams and aquifers, making clean drinking water less available. The animals will suffer from all aspects of the gas industry, including noise pollution, bright lights, toxic water, habitat destruction, deforestation, to name a few. The roads will be torn up by the huge trucks needed for fracking. The trucks will make driving on country roads much more hazardous. State parks will be closed or be forced to run on skeleton staff. Roads in the parks will be closed (except the roads needed for gas companies). Being outdoors will be less pleasant with black flies and West Nile virus to worry about, not to mention bad air to breathe. Just when we need more money for the DEP, a huge cut will necessarily adversely affect its work. We need more watch dogs everywhere to observe the goings on of the gas companies and make them accountable. I guess this means less public protection and more leeway for gas companies to operate with little overseeing.

For PennFuture to say that it cares about tourism and quality of life for its citizens and still support rampant gas drilling all over the state is disingenuous at best. When will we realize that we really can't have it both ways? Severance tax or not, we are headed for trouble. There won't be anything left to protect after all the wells are drilled and the pipelines laid. It's really not about the budget. It is about hydrofracking gas wells. Read the article here.