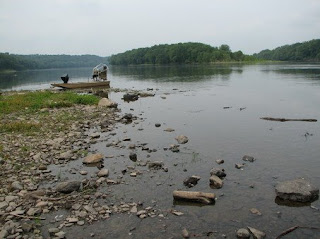 In April the Susquehanna River Basin Commission convened its interagency Drought Coordination Committee to assess growing impacts to water resources in the Susquehanna basin due to ongoing precipitation shortfalls. Three consecutive months of shortfalls have caused streams and groundwater well below normal for this time of the year, particularly in the Lower Susquehanna region in Pennsylvania and Maryland.

If drought is a concern, why are gas drillers given permission through the permit process to extract millions of gallons of river water for their drilling operations? This water is consumptive in nature, meaning that it ends up as hazardous waste and cannot be reused as water again. It is gone forever. Should not drilling be halted until a drought subsides? Why are the citizens of PA asked to fixed their leaky toilets to save 200 gallons of water per day, take shorter showers instead of baths, and repair dripping faucets while gas drillers are allowed to take as much water as they need for their operations?

I think the answer lies in the money the state stands to gain by gas drilling. We've heard about selling someone down the river. What about selling the river? Our river is now a commodity. This is unconscionable.

The Susquehanna River Basin Commission will meet in Binghamton, NY, on June 18th. Go to the website here. Read the press release about the drought and rainfall deficits here.

Read an article from the Baltimore Sun about the threatening drought. All kinds of measures may be put in place, including mandatory water restrictions on golf courses, power plants, and big water users. There is not a mention of the hydrofracking of gas wells. Will the gas drillers be asked to curb their water use like everyone else?

DEMAND ACCOUNTABILITY!
Posted by Peacegirl at 9:01 AM