Caught In the Act in Colorado 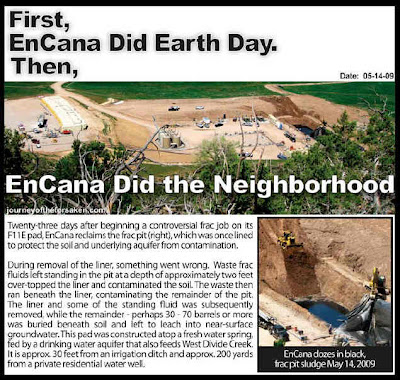 An environmental activist from Colorado came upon this scene, and this is part of what she wrote:

On May 14th I was conducting a wrap-up interview with a documentary film crew in an area overlooking EnCana’s F11E pad, when quite by happenstance, the crew began reclaiming the frac sludge pit. During removal of the liner (probably due to the large volume of sludge left standing in the pit) the waste overtopped the liner, contaminating the soil beneath. The liner was subsequently removed, some of the sludge pumped out and the remainder dozed underneath soil in the unlined pit. Sadly, this pad lies atop shallow ground water – an aquifer which EnCana intercepted at 200 feet. The aquifer feeds a spring that often exits at this location and also feeds Divide Creek - where we get our drinking water. It is also within about 200 yards of a neighbor’s private water well and only 30 feet or so from an irrigation ditch. It looks like this sludge is destined to leach into the aquifer. Not many people are aware of or understand the risks these chemicals pose, so I hope the footage and photos posted on this week’s update will be helpful, especially in the effort toward repealing exemptions from the Safe Drinking Water Act. I can’t discount the coincidence of seeing this pit cover up when it happened. Had we been a few hours later, we would have never even known. It begs the obvious question, “where else?” And industry is standing firm on how safe it is… but this incident shows a different side.

For a pictorial documentation of how the frac chemicals were bulldozed into the soil, go here.

Below is a video of this illegal disposal of toxic chemicals. Or perhaps it is not illegal since the gas industry is exempt from the Safe Drinking Water Act and the Clean Water Act.


Thanks to Journey of the Forsaken and Lisa Bracken for reporting and documenting this incident. www.journeyoftheforsaken.com
Posted by Peacegirl at 7:48 PM