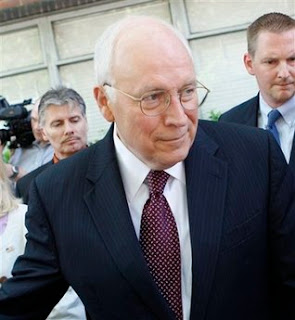 A business associate of Dick Cheney, Albert Jackson Stanley, has admitted guilt for coordinating over $180m of bribes on behalf of a consortium led by Halliburton, the US's biggest and most profitable oil and gas services company based in Houston, TX. In an exclusive report published by businessdayonline, we read about how international companies and politicians ran Africa's biggest corruption scandal ever. According to documents obtained by The Africa Report, as well as eye-witness accounts, Halliburton and three other companies paid bribes to win a contract to build a $6bn liquefied natural gas (LNG) export project on Nigeria's Bonny Island. Nigerian investigators have discovered that their country has lost hundreds of millions of dollars through over-priced contracts and bribes linked to the project. Last August, Nigeria's House of Representatives heard evidence suggesting that the country could be losing billions of dollars through under-pricing of its gas exports. That's the gist of the situation now being brought to light. How will it turn out? What was Dick Cheney's role, if any, in this crime syndicate? That remains to be seen.

When Stanley pleaded guilty on September 3rd to the US Department of Justice, it was brought out that many of the bribes on behalf of Halliburton were paid on Cheney's watch. Cheney was CEO and chairman of the company from 1995-2000. He supposedly had to sever all ties to Halliburton in order to become our Vice President. Remember that? During the 2000 presidential campaign, Cheney was asked about these "payments" (aka bribes), but he said "the charges are false."

Cheney appointed Stanley as president of Kellogg Brown & Root, a subsidiary of Halliburton in 1998. [KBR is the company which built the showers for Iraq soldiers, several of whom were electrocuted in those showers. *See note below.] While serving as our Vice President, Cheney was more tight-lipped about his relationship with Stanley. But after Britain, France, Nigeria, and the US started investigations into Halliburton's involvement in the corruption syndicate in 2004, Halliburton tried to distance itself from Stanley.

Stanley's decision to plead guilty on 3 September 2008 to offenses under the US Foreign Corrupt Practices Act could prove to be very bad news for Halliburton.

As this investigation proceeds, other Halliburton top officials may be charged and may face substantial jail terms. Cheney, for his part, may or may not be prosecuted. US anti-corruption laws cover cases where senior managers and directors of companies knew, or should have known, that bribes had been paid. No one has come forth with evidence yet that might implicate Dick Cheney. However, since this deal in Nigeria was one of the biggest contracts globally, it is reasonable to assume that Cheney might possibly have known about it and that he was aware of Halliburton's links to a complex web of fraudulent financing and tax evasion schemes.

It looks bad if Cheney knew and didn't act; it could be worse if he didn't know, according to one Washington lawyer.

Another player in this scheme was British lawyer, Jeffrey Tesler, who was paid a consultant fee on the Nigeria gas plant in 1999. Tesler was a central figure in all of this. It was he who set up front companies and foreign bank accounts for the shady operation. He moved money from New York to Amsterdam with much of it ending up in payments to Nigerian officials and a Nigerian political party, according to Stanley. During Cheney's chairmanship, of course.

There's more to the story. If you want to read more, go here. If you are a playwright, this story could be the stuff of a great movie.

On the right is the Bonny Island gas plant in
Nigeria 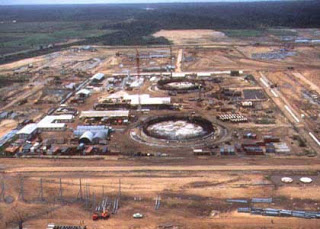 while it was under construction.
What does Dick Cheney know about this gas plant? Will we ever know?

The original article was written by Patrick Smith and Lucy Komisar for businessdayonline.com.

*Now, a new Pentagon document shows that 94 percent of American troops in Iraq, Afghanistan or other CentCom facilities with KBR contracted showers, sought medical treatment for electric shock.
Posted by Peacegirl at 10:23 AM