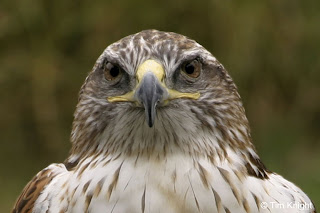 The effects of natural gas drilling can have both indirect effects leading to population declines and direct mortality in wildlife. So claim the Colorado Division of Wildlife officials in an article published in the Valley-Journal last December (2008). Click here to read the original piece. John Broderick, DOW senior terrestrial bioloigist said,

...if and when intensive drilling comes to the Thompson Creek area where several gas leases have been sold, the impacts will be unmistakable.

Waterfowl suffer the greatest direct mortality rate. Ducks land in reserve pits or production pits and are coated with oily substances. Sometimes these birds can be cleaned by hand and saved. However, usually they die of respiratory failure, according to Broderick. Elk calves and deer also get into these pits to drink. But unless the animals keel over and die right in or near a pit, it is difficult to establish the cause of death in animals.

The less obvious effects of gas drilling on animal populations is more significant. The drilling and road construction that goes along with it disturb animal habitat and fragment the areas where animals live and breed. In the long term, this results in significant population declines. Raptors- hawks, owls, and eagles- are particularly vulnerable to this stress. Raptor pairs will often not mate, or they abandon eggs or even their young.

Roads are a big factor, too. They cut through unbroken habitat and expose ground areas which provided cover for the animals. This interferes with the temperature and with shelter from wind and cold. The animals, such as deer and elk, are left with less hiding cover. Roads and gravel well platforms increase runoff. Less water goes into the soil, and toxic chemicals end up in nearby streams. Roads upset the native vegetation, allowing weeds to establish themselves, thus reducing the forage for the animals. People, who would never have had access to pristine forest areas, now have easy ways to drive around. Roadkill is on the rise. With this problem of humans entering the animal habitat, poaching and other illegal activities become more common.

It is hard to come up with scientific evidence that will hold up when confronting regulatory agencies. However, Colorado officials concerned about these issues are looking to Wyoming for data. Scientists in Wyoming have discovered that, while one well per square mile may have minimal effects on mule deer populations, multiply that by 16 wells per square mile, and the detrimental effects can be measured more convincingly.

Fish can also be affected. In the Colorado River, cutthroat trout are common. Trout streams can become inhospitable to fish when sediment gets into the water, sinks to the bottom, and fills in the spaces between gravel stones. These areas provide habitat for aquatic insects which the trout love to eat. Sediment from drilling operations buries and smothers the insect larvae which normally develop and grow among the stones. Spawning is also affected. Trout lay their eggs in hallowed out places in the gravel. When the eggs are fertilized, the female sweeps the eggs into the spaces between the stones where they remain until hatched. After the baby trout are hatched, they stay in the gravel until they are old enough to feed. Ken Neubecker, president of Trout Unlimited, said,

If sediment coats the stream bottom during this time, the brood will be smothered.

Spills are another threat to fish. There are a number of ways in which industrial materials or toxic chemicals can end up where they shouldn't be. Spills from tanker trucks and leakage from holding ponds are common. Depending on where the spills originate, they can contain hydrocarbon chemicals, bentonite, and other harmful substances. Neubecker describes the result:

You get a bunch of that in a stream and it would be like lining a pond with concrete.

Some toxic hydrocarbon substances would be even worse, especially in smaller streams with low water.

It'll sterilize a stream for a long distance. A small stream would take a lifetime to recover.

Some gas leases in the Thompson Creek area in Colorado have stipulations that no roads or well pads can be placed within 350 feet of streams. While that may seem like a good thing, the gas companies can and do ask for waivers. The Bureau of Land Management often allows the gas industry to skip the restriction. Enforcement is also problematic. If a spill is reported, if it is not investigated in a timely way, the volatile chemicals evaporate before any testing is done.

Since human beings are equipped with abilities that presumably far exceed those of other animals, it behooves us to use care when extracting natural gas from the shale beneath us and to proceed in a manner that does not hurt wildlife and the habitat they depend on for their existence. 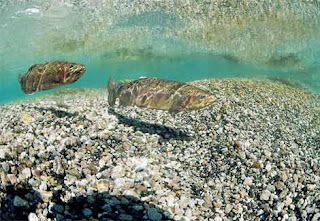 PROTECT OUR WILDLIFE
Posted by Peacegirl at 5:23 PM