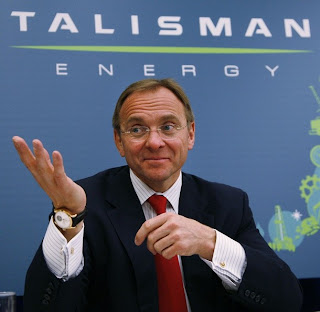 The Towanda Daily Review announced today that Talisman Energy, formerly Fortuna, has given a donation, albeit not a generous one by any means, to a very worthy local charity, Grace Connection, which reportedly ran out of funds last February and had to close temporarily. To read about the donation, check out the article here.

Now let's consider this: In 2008, the CEO of Talisman, John A. Manzoni (pictured above), received a salary of $1,254,000. However, the total compensation for CEO Manzoni came to roughly $8,816,000. Manzoni was listed on Canada's 100 highest paid CEOs in 2008. On that list, the average salary, not counting bonuses, was $7.3 million. That same year Canadians were hard hit by the emergence of the worldwide recession (Canadian Centre for Policy Alternatives). The average working person in Canada earned $42,305 a year. Economist Hugh Mackenzie, who authored a report, said,

Mackenzie also noted that the Canadian CEOs on the top 100 list also collected an average of $1.6 million a year in bonuses related to stock options and "much more than that in stock grants."

Now back to that generous (?) donation to Grace Connection,  Talisman cannot really think this amount of money represents anything more than a disingenuous attempt to make people think it is concerned about the lives of local people, can it?  How about a half a million dollars?  That would be more commendable and proportionate in my opinion.  Every little bit counts, of course. Talisman's donation is needed in any amount, but it is so paltry compared to the millions of dollars of profit these gas companies take in at the expense of many people who are personally affected in not so beneficial ways.

A question for Mr. Manzoni:  That's a really nice looking watch, sir.  What time do you have?
Posted by Peacegirl at 7:47 PM