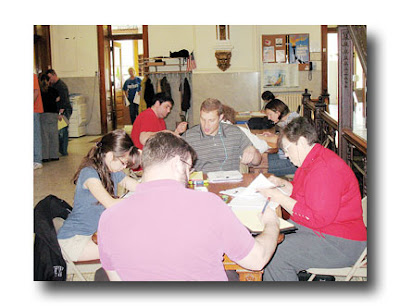 The rotunda of Bradford County Courthouse
Photo by Wes Skillings
The situation at the Bradford County Courthouse has gotten out of hand.  The county commissioners have made some necessary changes so that the employees at the courthouse and the citizens who have business there can use the building for the purposes for which it was designed.  The" gas gang" as it is being called is having to do their business under new guidelines to which some are really objecting.  One gas industry contractor said,


Contractors like myself are out there working and bringing money to this county. I figured that my group alone brings in about five grand a month...I just don't understand why y'all wouldn't cater to us.


This thing about the money has been thrown in my face. We're not going to sell our county out for a dollar bill...I get tired of hearing how much money you are bringing in.


The rotunda of the courthouse is not a corporate office. It's not a cafeteria, and it's not a social club.

The commissioners' outrage is certainly understandable and justified. However, do they remember that it was their idea to wholeheartedly bring the gas industry to Bradford County and lease 90+ acres of public land in order to make money for the county?

Read the article from the Rocket Courier.  There are many more details which will make you wonder:  Do the gas drillers own the place?  Why do they think they do?  Where are their manners?
Posted by Peacegirl at 9:51 PM

I just have a quick question for you but couldn't find an email so had to resort to this. I am a progressive blogger. Please email me back at barbaraobrien@maacenter.org when you get a chance. Thanks.

He's not going to sell out his county for a dollar? What the heck does he think that leasing the land at the elementary school was? Those little kids will be exposed to who-knows-what-chemicals for what? The almighty dollar and that's what it all boils down to!He may want to refrain from drinking at the water fountain in the school while he's telling the parents and children how he's protecting them so well.

Besides all the well monies paid out and the royalties yet to be paid to the Bradford County, they are also making a killing with the fines they impose on the trucks going to the gas wells. With every well permit issued, they surround the access to the well with 10 ton weight limits and strike gold with some trucks not having the proper permits. Fines have been averaging $14,000 per driver. The way the judgments at the Bradford County kangaroo courts have been ruled, it makes you wonder what percentage of the fines that the officials are pocketing. Any talk of reducing local taxes? Ha

fear monger.
fracking has been being done by 60+ years in some states. Monitor the well casing pouring, and there will not be problems.

Yes fracking has been underway for years in other parts of the country, but even the gas companies will conceed that this is new territory with regard to the problems that are arising. There needs to be more time spent figuring out why these problems are arising. It's not just well casing suring up. Slow down and evaluate. The gas isn't going anywhere.