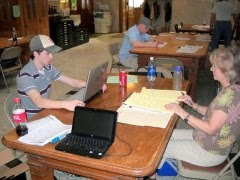 The Rotunda at Towanda County Courthouse
[Photo: The Towanda Daily Review]
Even Commissioner Doug McLinko, a staunch supporter of gas drilling in Bradford County (PA), is drawing the line.  The three commissioners of the county have had to clamp down on unacceptable behavior at the courthouse in Towanda, the county seat.  It seems that as many as 80 people are descending on the courthouse rotunda daily to search for information on gas leases and properties on which leases will be signed.  Nothing wrong with these people except they seem to have gotten the idea that they are entitled to make themselves at home to the detriment of the normal courthouse activities.  They are monopolizing the tables in the rotunda area, eating their fast food lunches, playing loud music on computers, and watching movies.  The county has had to hire another custodian to help clean up the mess in bathrooms and even scrape food off the floor at night.  The commissioners tried to talk to representatives of Chesapeake Energy and Talisman, but to little effect.  Finally Mark Smith, head commissioner, took things into his own hands and removed some of tables, leaving room for only 42 people.  Rules of use were put at each table.  It seems the people doing the gas drilling work had forgotten they are indeed guests there.  The local people are beginning to resent the intrusion of the gas industry even at the courthouse.  The crumpling roads and long lines at the coffee shops are other reminders that "they are not in Kansas anymore."  It is now almost impossible to even find a motel room available, not even for social services who need spaces for the homeless.  The drillers have commandeered  every last room.  Perhaps that problem will be alleviated when dormitories are built to house these men, a plan which is in the works.

When will life return to normal for the residents of Bradford County?  Sadly, the answer is probably never.

Read all about it here.
Posted by Peacegirl at 5:14 PM

Yes although it is true that there are a number of gas companies in the area however lets not forget that Bradford county is cashing in on these companies raising the hotel rates to a minimum of $160.00per night and everything in this county has gone up 10 fold. Not everybody works for an oil and gas company and can afford the prices in grocery stores, hotels for family and guest visiting local people, etc... Bradford county may complain about oil and gas people however it is these same companies that have raised their revenue in every area. I can't help to wonder if the good people of Bradford County question the officials and representatives that they have voted into office about where this increase of revenue is going and will the revenue benefit the good people of Bradford county. So take away the tables at the courthouse but build more hotels to "house" the oil and gas industry. If thats not a double message, I don't know what it!! I hope the good people of Bradford county and other counties in the area aren't fooled by the hypocricy here. I have visited Bradford County and have yet to hear loud music coming from computers and people eating at the tables. Although, I am not saying it hasn't happened, I am just saying it is more the exception than the rule.