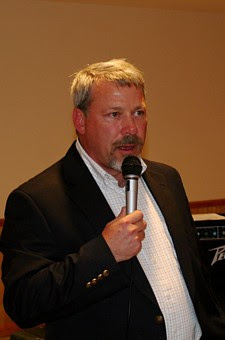 Tim Ruggiero, Texas citizen and land owner
Two Texans who live with the “boom” of the gas-rich Barnett shale are traveling across the country to warn citizens living above the Marcellus shale what they can expect:

3) Little or no help from government regulatory agencies


Once you know, you can’t NOT know.

In other words, as citizens understand the escalating problems of gas drilling in their neighborhood - from noise to odors to evidence of elevated toxins in their own blood samples - the situation cannot be ignored.

Opposed to Being Poisoned

Tim Ruggiero’s business card says “Texas Land Owner.” He and his family live in Decatur, Texas, not far from DISH. As he puts it,

Both Tillman and Ruggiero recently spoke to audiences in New York City, Philadelphia, Clearville, Midway and Pittsburgh, PA. They make a point of telling listeners that they travel at their own expense. In response to a question from this blogger, they explain their motivation this way: Ruggiero:


My wife and I are not the first two people to get run over by the gas industry. If we can get the industry to behave in an ethical and moral manner, it will have been worth our efforts. Otherwise, the gas industry will keep behaving badly until they are made to stop.

Tillman: “What happened in DISH, Texas, doesn’t have to happen here. Maybe, together, we can make changes in the way the gas industry and government regulators operate.”

Because of verbal attacks by the gas industry, Tillman tells audiences, “I’m not a paid lobbyist. I’m not on a crusade to end gas drilling. I don’t get paid to be the mayor of DISH, Texas. I’m not getting paid to be here. I’m using my vacation from my real job, and I paid my own way here.”

Visit un-naturalgas blog here (Or click on the link in the righthand column of this blog.)
Posted by Peacegirl at 7:58 PM