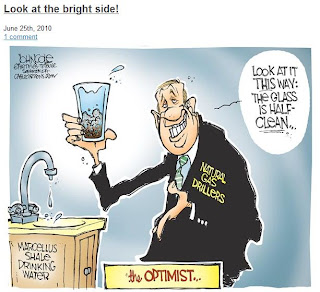 Something just doesn't sound right here.  The Towanda Daily Review reported today that for more than 10 years the Towanda Municipal Authority (TMA) has been searching for a suitable location for an additional municipal water well.   A 1996 study commissioned by the TWA showed that more water was needed to supplement the two existing wells (one in North Towanda and one in Laddsburg).  No solution, no location has been found in all this time.  One reason is a high manganese level in the ground water.  Another problem is the regulation of the DEP which requires a water protection zone 400 feet around a water well.  Most suitable land has already been developed.  So the TMA is now looking for a place along the Susquehanna River.  There is even talk about two smaller wells which would not require the larger water protection zone.  Another solution may be to build a water filtration plant on the river and use river water as a drinking water source.  Other municipalities drink treated river water, according to Tom Fairchild, TWA manager.

Well, this sounds all well (no pun intended) and good, except for one small thing.


If safe drinking water is a worry, and more is apparently needed,  why have local authorities allowed the natural gas industry to come into the area and suck millions of gallons of water out of the river every single day?

Every gas well requires anywhere from one to seven million gallons of water per hydro-frack, and each well can be fracked multiple times in order to produce the maximum volume of gas.  It is no secret that many problems have occurred in the water wells of local residents since the deep gas wells have been drilled in the last few years.  So the water supply, springs, aquifers, are being compromised as we speak.  Yet local authorities have supported the consumptive use of precious water in order to supply Chesapeake Energy, Talisman, and other gas corporations, who have as their primary goal making millions and billions of dollars while stealing  taking water out of PA streams and rivers by the truckload every day. This is a travesty.

The Susquehanna River has its own life cycle.  It is higher in the spring, lower in times of drought.  There are regulations in place presumably which monitor water levels.  However,  it would seem to me that, if there is a shortage of water at the present time, and has been a worry for more than a decade,  it follows that no private business should be allowed to use enormous amounts of water, especially since this water can never be returned to the hydrologic cycle.  This water tainted by the gas industry is gone forever.  Where will this lead?


Should not water, a finite resource, be used in responsible ways for the good of people, especially since water is necessary for sustaining life?

I think that the TMA is ignoring the elephant in the room.  If there is a serious water shortage problem,  stop giving the gas industry carte blanche.  Put people first.  We can't drink natural gas.  We need water.  Help us conserve our water supply.  Stop gas drilling!

DEMAND ACCOUNTABILITY!
In loving memory of Robert Shippee
1922-2010
He loved the river.
Posted by Peacegirl at 10:07 AM

You are so right. This is crazy! Sustainability and safety should come before greenbacks. Thank you for spreading the word, its nice to be able to follow what is happening in the region since I don't read the papers that you mention, too busy watching the news in Luzerne County. I'm getting my fill of the pre-fracking beauty while it lasts.

it's like they don't understand that, as far as water is concerned, everything is connected. Using water to extract fossil fuels is about as short-sighted as you can get....

The whole world is crazy. It's like a bunch of drunk sailors are in charge.

OK, let's review... Towanda needs drinking water NOW.So, they are allowing gas companies to extract mega-amounts of water from the river and turn it into toxic waste. Remember the scientist who said he has a way to turn fracking fluid into drinking water? We asked, "Did you drink it?" and his wife answered, "I wouldn't drink that stuff"? He had worked for TEN YEARS on this problem and the best solution he had come up with for disposing of the toxic waste? Drill down four miles and put it down there. Down there? That's your best shot? The finest scientific brains have worked for ten years and their solution is to put the waste "down there"? That's INSANITY! Well, maybe the people who work at the new water treatment plant for Towanda's drinking water from the river can get together with the people who work next door at the toxic waste treatment plant. I can see it now, "Well, we're hoping for crystal clear drinking water from our beloved river" and the answer? "Well good luck on that because we 'treat' the toxic waste by diluting it with more river water and spreading it on roads and dumping it wherever we can, including IN THE RIVER!" AND the eminent scientist in this field basically already told us that we shouldn't drink any percentage of frack fluid chemicals, but dig down four miles and dispose of it "down there".WHEW! Then, there's the fact that I taught my kindergarten students: the water that we drink today is the same water that the dinosaurs drank; Earth has a finite amount of water.Sometimes it is hard to fathom that when you are looking at the Susquehanna River when it's flooding or Niagara Falls, but it's still a basic truth.So, we are going to take large amounts of water and turn it into toxic waste? My kindergarteners would be able to figure out that that isn't a good idea.Long after this extra few years of gas is over, when water becomes more precious than gold, our descendents are going to be really ticked off that we squandered so much of their birthright- clean water.

Water falls as rain or snow.

The only ones MAD, are the ones that did'nt get a GAS CHECK, or the stupid hicks that signed away there ground for penny's on the dollar and there friends are getting $4,000/acre !! No body in Towanda cares about WATER, the dumb fools buy that with there gas money in stores anyways.....