Fracking Waste Water Will Likely Be Treated In New Plant In Wysox, PA 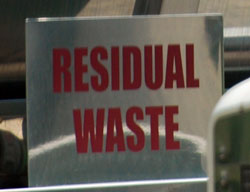 WYSOX TOWNSHIP - Two public hearings will be conducted this week on the proposed construction of a treatment plant off Leisure Drive in Wysox Township, which would process waste water from hydraulic fracturing, according to legal ads that were recently published in The Daily Review.

Eureka Resources LLC of Williamsport is proposing to construct the treatment plant on property that is currently owned by the Central Bradford Progress Authority, according to a copy of the Eureka's notice of application for a special exception permit to construct the facility, which was filed with the township. The plant would be located between Leisure Drive and the Susquehanna River, according to one of the legal ads. Bradford County Economic Development Manager Brian Driscoll, who works for the Progress Authority, said the entrance to the plant would be some distance from U.S. Route 6. "We're probably talking 200 to 300 yards from Route 6," he said. "I don't know the exact amount." "I believe they (Eureka Resources) have an option to purchase the property" for the treatment plant, he said.

As long as the township boards are in favor of granting the special exception permit for the plant, "we don't want to stand in the way of it," he said. Driscoll said he did not believe that any of the treated water would be pumped to the Towanda Municipal Authority's sewage treatment plant for further processing. "I think it (the treatment) would consist of a total recycling process," he said. Daniel Ertel, who is one of the owners of Eureka Resources and who serves as a spokesman for the company, was not available for comment, as he is on vacation until Monday.

As many people as possible should attend this hearing. Whether you live, work, shop, or just pass through Wysox you will be affected. Not only do we have a river water withdrawal point on Leisure Drive which brings water trucks into Wysox to clog our intersections and roads, now we will have additional residual waste trucks clogging Route 6, further tying up the intersections and dumping their nasty loads into this new facility to be treated, either fully or partially. The article doesn't say what the special exception permit is concerning. An update on this point would be good to have in tomorrow's paper so people know what aspects of the permitting to comment on in the public hearing, since only those aspects of comments which are relevent to the special exception permit will have impact on the decision. An additional article could also cover just what the plant capacity is so that we know just how many more trucks we are in for. Let's think ahead to the future of Wysox and deny this permit for what will be just one more gas infrastructure project which will not serve our community in the long term. Wysox is becoming an industrial wasteland, and will be no place to live, work or shop in the future. I wouldn't even want to stay in the new 40 room Riverstone hotel addition with passing residual waste trucks and a water treatment facility just down the road. I guess it is better to stay at the new hotel though, than to have to live in one of the approximately 5 RV's parked discretely behind the long yellowish building behind Shoney's Restaurant. These RV's are likely not an approved land use for the lot, and sit next to approximately 23 red dumpsters which were recently brought in with unknown contents. Several tanker trucks complete the pretty picture. The RV's look occupied based on the vehicles sitting near them, and other indicators of habitation. At least in the days of the coal barons, miners were given substandard shack housing to live in. We as a community have relegated gas workers to living in RV's wherever anyone can conveniently, discretely, and most often, illegally tuck one. Though I am not a fan of drilling, even I think that our area's guest workers deserve better. Planning by the townships and county must be at rock bottom to allow these "facilities" to go unnoticed for the most part.

LINK (to the above article in the Towanda Daily Review)

For more information about the problems with disposal of frack fluid (also known as flowback or brine), click here.

Wow! Somebody besides us doesn't want gas drilling and its nasty by-products near Camp. It's really too bad that French Azilum residents could not foresee the future before they signed on the dotted line. I'm just glad that Camp didn't sign a lease that first year. Although the outcome will most likely be the same, at least you did some RESEARCH and found out about the true consequences of drilling, including truck traffic, road deterioration, well pollution, and the problems of having a great deal of toxic waste left after drilling. If not for you, I am absolutely certain that Camp would have signed a lease that very first year. We still can't do much about it, but at least we did not walk into the situation blindly and without doing our homework first. I am thankful to you because you gave our Hutchinson family time to get used to the idea that Camp will be in an industrial area (now downstream from the toxic waste treatment). We have already seen the pictures of the drill rig across the river, so bright that you cannot see the stars at Camp. I realize now that selling Camp would not bring anywhere near enough money to relocate our family camp. I don't think that most Hutchinsons will even WANT a new gathering place for our family. They want things just as they were a few years ago. Well, Dad and you and I and a few others wanted Camp as it was when we could take a boat out fishing, go horseback riding, and sing together around the piano in the evening. Gas drilling just exascerbated the problems at Camp. It was already the case before then that, except for Memorial services and meeting, very few people came to Camp each year. And now? Well, tubing down the river may have the same results as waterskiing on Onondaga Lake- chemical rashes and/or burns.Let's just leave the gas in the shale until they figure out a non-toxic way to get it out that DOESN'T turn farms into polluted, unusable land, with running water in the sink that you can light on fire. How about THAT?