Another Wastewater Spill in West Virginia 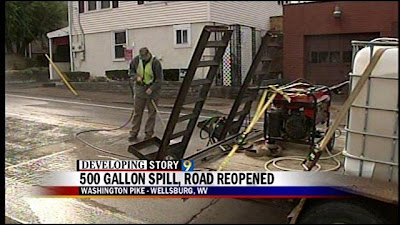 A tanker truck carrying drilling wastewater in Brooke County, West Virginia, spilled 500 gallons of the extremely slick brine October 13th.  The spill covered nearly three miles of heavily traveled roadway, turning it into a very hazardous road, so slippery it was like a layer of black ice. The tanker came from a nearby natural gas drilling site.  It was reported that the driver of the truck had no idea his truck was leaking.  Apparently other motorists saw the leak and called 911.

My question:  Even though the EMA director said the brine is not considered a major environmental threat, he did say that the clean-up crews didn't know all of the chemicals they were dealing with.  If we don't know what is in the brine, how can anyone say it is not an environmental threat?

I agree, we must demand accountability for whats in the waste water. The alternative is to ruin the vast amounts of water used in hydrofracking and risk our very existence.