Fort Worth: Carter Avenue Will Be Pipeline Alley 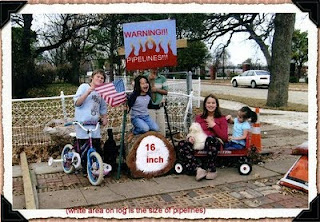 A top story from Fort Worth announces that Chesapeake Energy is poised to proceed with its plans to install a 16-inch natural gas pipeline along Carter Avenue, a short residential street in East Fort Worth. The proposed pipeline that Chesapeake seeks to install is not a typical domestic gas-line but a large diameter, high pressure, un-odorized, corrosive, wet gas gathering line straight from the wellhead. Its purpose is to connect two separate gas wells near I-30, aka Tom Landry Freeway, in east Fort Worth. Alternative routes are available but Chesapeake has indicated a preference for the Carter Avenue route.

If completed, the proposed Carter Avenue pipeline would be the first such pipeline of its kind in the city of Fort Worth.

The pipeline will be buried 75-130 feet beneath the front yards of more than 30 homes. It was thought to be problematic for it to be located along I-30. Why? Because there are no access roads in the area, and, if the line ever needed repairs, the entire freeway could be shut down. The residents of Carter Avenue are hard-working people who just want to live on a nice street with their families. Just last year new sidewalks and new pavement were put in there. But to Chesapeake, and perhaps even to public officials of Fort Worth, these people are secondary to the main priority of putting in a pipeline. There are more than 2,000 natural gas wells in Fort Worth at present, and companies are building pipelines and compressor stations to get the gas to market. Gas companies have formed their own pipeline companies which enjoy rights to condemn land just like a city government or utility company can do in Texas. There are no legal protections in place to help citizens avoid the destruction of their property.

Chesapeake has been busy filing condemnation suits against landowners on Carter Avenue. Some of the residents, like 72-year-old Jerry Horton, are in poor health and can hardly deal with this crisis. Seemingly oblivious to the plight of these humble citizens, Chesapeake's CEO Aubrey McClendon came to town today (10/16/2009), sporting a dashing red sport coat, to express his company's commitment to the community. He has opened a new office in east Fort Worth and donated 12 used computers to a near-by school. [Wow!] He told a gathering that he expects to invest a billion dollars a year in the Fort Worth area for years to come.

Has McClendon visited any of the people who live on Carter Avenue? If he did, would he even be capable of understanding what his company is doing to them?

People are expendable in the gas industry business. A homeowner on Carter Avenue, Steve Doeung, said,

A block party was held tonight in the 2700 block of Carter Avenue. The residents are protesting and boycotting the controversial natural gas meeting hosted by Chesapeake at Texas Wesleyan University.

According to one source: The Chesapeake meeting at Texas Wesleyan University was announced on short notice, canceled, and rescheduled the same day. One resident of the affected area was notified by mail, and he is the only resident who has refused to lease his property to Chesapeake for the pipeline.

"high pressure, un-odorized, corrosive, wet gas gathering line".... think about it - is that something that should be in ANY neighborhood. What happened to [Mayor]Moncrief's promise to... "WE WILL KEEP THE NEIGHBORHOODS SAFE. WE WILL PROTECT THE NEIGHBORHOODS!"

I guess Moncrief should not have made such a sensible statement before checking with Chesapeake. Maybe the new motto for the Fort Worth's City Council's should be ... "CHECK WITH CHESAPEAKE BEFORE YOU SPEAK!"

Check out these links for more information on the Carter Avenue crisis here, here, here, and here.

Texas Sharon weighs in here. "What Would Jesus Do On Carter Avenue?"