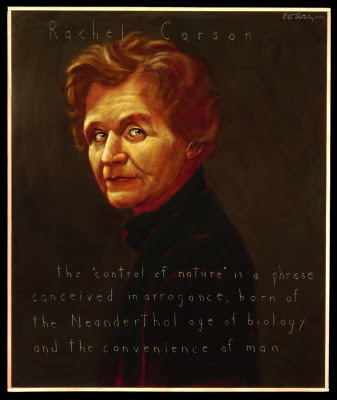 Rachel Carson Biography
Biologist, Writer, Ecologist, 1907-1964
“The ‘control of nature’ is a phrase conceived in arrogance, born of the Neanderthal age of biology and the convenience of man.”

Rachel Carson was born in Springdale, Pennsylvania, and spent her childhood on a farm. She studied English and Zoology at Pennsylvania College for Women (now Chatham College) and received her M.S. degree in Marine Biology from Johns Hopkins University. She taught Zoology at the University of Maryland before going to work for the U.S. Fish and Wildlife Service where, in 1949, she became chief editor of publications. In 1952 she purchased land on the Sheepscot River in West Southport, Maine.

If the courage of a single human voice can be measured by the ferocity of the attempts to silence it, the writer of The Silent Spring (1962) stands as a truthteller of exceptional courage and insight. Her carefully researched exposure of the environmental damage caused by widespread use of pesticides was vigorously attacked by chemical corporations. In 1992 a panel of distinguished Americans voted The Silent Spring the most influential book of the past fifty years. Today Rachel Carson is revered as the founder of the environmental movement in America.
Her earlier books include Under the Sea Wind, The Sea Around Us and The Edge of the Sea. In 1954 she wrote: “The more clearly we can focus our attention on the wonders and realities of the universe about us, the less taste we shall have for destruction.”

After the publication of The Silent Spring Rachel Carson wrote to a friend: “The beauty of the living world I was trying to save has always been uppermost in my mind—that, and anger at the senseless, brutish things that were being done. I have felt bound by a solemn obligation to do what I could---if I didn’t at least try I could never be happy again in nature.”

Posted by Peacegirl at 6:52 PM