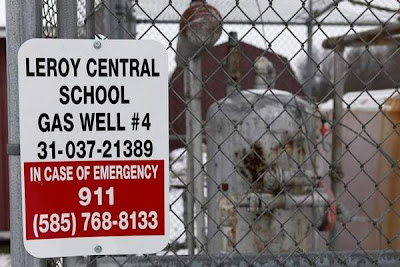 LeRoy, New York, is the location of a mysterious cluster illness at the Junior Senior High School.  Fifteen students have exhibited varying degrees of involuntary twitches and verbal outbursts not unlike those associated with Tourette's syndrome.  I have seen these students on the news here locally.  Absolutely NO mention has been made until yesterday (at least I have not heard about it) of the five natural gas wells owned by the LeRoy school district and ring the school building which opened in 2003.  These wells have been hydrofracked and are active wells.  Why hasn't the presence of these wells been part of the investigation to discover what is causing the illness of these young people?  In addition, there was a major train derailment there on December 6, 1970, within three miles of what is now the school site.  There are still rumors that the school is built on land that was used 42 years ago as a dump site for the contaminated soil. Thirty thousand gallons  of the solvent trichloroethylene and also one ton of cyanide crystals were spilled in this accident.  Was the school built on a toxic waste dump?  [Note: The area where the toxic spill occurred is designated as the Lehigh Valley Railroad Derailment Superfund Site.]

Here is the MSDS for trichloroethylene.

There has not been adequate testing at the school  It is way too soon to make any judgements as to the cause of the illness.  Erin Brockovich, known for her legal research on a huge California water contamination case many years ago, has said,


While we don't have the answers, we are suspicious that the all-clear has been sounded on the environmental side, and we don't believe that it should have been.

A long time ago Ms. Brockovich uncovered the fact that Pacific Gas and Electric had been poisoning the water of Hinkley for over 30 years.  Her story was made into a movie starring Julia Roberts.

Here is a must read article about Erin Brockovich's investigation of the rare illness in LeRoy, New York. She already has a prime suspect.
Posted by Peacegirl at 5:33 PM

Thanks for the gas well info, E.B. I hope the investigation sheds light on the interactions of TEC, hydrofracting chemicals, and local degraded contaminants - vinyl chloride being a candidate. And I hope this happens quickly. The defensiveness of the town and school officials is quite alarming.

I share your alarm, Phil. Why wouldn't the local town and school officials want to do everything in their power to find out as much as possible. These sick kids deserve that.

When a lot of people (children or adults) begin to complain of symptoms, it's a sign that something is not right. Whether it's from gas wells or contaminated soil, whether it's from the immediate school environment or something else in the community - it needs to be taken seriously. To put people's health at risk for corporate profit is unconscionable.