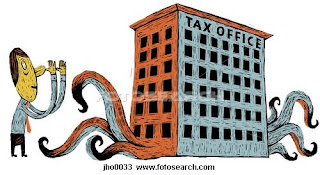 In Pennsylvania, if you are a gas drilling corporation, you get a free pass on taxes (no severence tax for them). But if you are a small non-profit service, fraternal or arts organization, a hunting or angling club, a veterans organization, a museum, zoo or aquarium, you will be taxed.
Here is an excerpt from today's issue of Session Daze from PennFuture:

Survival of the fittest
The proposed budget agreement between Governor Rendell and the leaders of the Senate Republican, Senate Democratic and House Democratic caucuses does not include a severance tax. Senate Republican opposition to the tax ultimately prevailed in the negotiations--if the agreement holds. In this Darwinian outcome, the well-heeled, huge multinational drilling firms, which spent more than $1 million lobbying state government between January and June, get a free pass on a tax they pay in every other major gas producing state. So, to cobble together enough revenue to balance the budget absent a severance tax, budget negotiators decided to tax small non-profit service, fraternal and arts organizations. These groups didn't spend a dime lobbying to avoid new taxes because they had no idea that they looked to budget-makers like easy-to-pick-off prey.

Exxon-Mobil strikes gold, firefighters get the shaft
Since multinational drilling companies get a pass on taxes, volunteer organizations- vital to public and personal safety in our communities- and other local groups have to pick up the tab. Volunteer firefighter and ambulance companies in Pennsylvania often struggle mightily to raise funds to operate, train and buy new equipment. Small games of chance are a significant source of funds for many companies. But now the proposed 20 percent tax on small games of chance could cripple the ability of many of these volunteer companies to raise funds. The same goes for hunting and angling clubs and fraternal and veterans' organizations.

Conoco-Phillips strikes gold, the arts get the shaft
While multinational drilling companies get a pass on the severance tax, non-profit community arts and cultural organizations across Pennsylvania woke up last Saturday to discover that they were being hit with a sales tax on their tickets. Many of these organizations have been struggling in the recession. The proposed tax also applies to museums, zoos and aquariums.

it's way past time for our elected officials to show us they really do have brains... and they really do know how to use them! ...to show us, e.g., that they can discern the priorities for sustaining life on earth and that they understand the importance of making quality of life enhancing and protecting choices vs.greedy short term ones.
when did this stop being a govt. of, by and for the people?