A major fishkill was first detected in West Virginia on September 1st and reported a week later. The problem occurred in Dunkard Creek, a beautiful stream along the Pennsylvania-West Virginia border. An article in the Pittsburgh Post-Gazette by Don Hopey explained that a bloom of toxic algae was being blamed for killing thousands of fish, mussels, and other aquatic creatures in more than 30 miles of the creek. The type of algae, golden algae, is usually found in hotter and desert environments, so it is baffling how this algae ended up in the creek. There are two mine treatment facilities in the area near St. Leo, West Virginia. There is also a new borehole which was being used as an injection well for drilling wastewater.

Consol Energy operated the two deep mines. A subsidiary of Consol, CNX Gas Company, is also involved with these mine operations. CNX had been cited for violations at its Morris Run injection well in 2007-2009 and fined $157,500. It is possible that these mines are not the source of the polluted creek water. Several environmental groups, watershed and sportsmen's organizations, and the PA Campaign for Clean Water are calling on the EPA to stop all gas well drilling discharges into Dunkard Creek and require Marcellus shale gas drilling operations to document where they are disposing of all wastewater.

Meanwhile, many people who have enjoyed the creek are devastated by what has happened. Betty Wiley, president of the Dunkard Creek Watershed Association, said,

We've just been decimated down here. Everything is being killed almost from the headwaters of the creek to where it flows into the Monongahela River. It's such a tragedy for the creek. An ecosystem has been destroyed.

Preliminary counts have estimated that more than 10,000 fish have died. Environmental agencies say it is the worst they have seen. Eighteen species of fish and at least 16 species of freshwater mussels have been been all but wiped out. The salamander mussel and the snuffbox mussel are both being considered for the federal endangered species list.

Federal and state investigators have reported extremely high total dissolved solids (TDS) and chlorides- properties found in wastewater from Marcellus Shale gas well drilling operations but not mine water. Furthermore, dead fish were found about a mile and a half up the creek above the treatment plant, making it quite unlikely that the mines could be solely responsible for the lethal discharge. State agencies are now looking at the possibility that someone has illegally dumped drilling wastewater into the creek to avoid the expense of complying with laws governing disposal. West Virginia DEP spokeswoman Kathy Cosco says,

The elevated levels of TDS and chlorides in the creek indicate oil and gas drilling wastewater. We are following up on every lead that people give us. If they saw a truck pull up to the creek and put a hose in, we want to know about it. We want the name on the truck, a license plate number, anything we can use to identify it.

Ed Presley, who owns property along the creek said,

It's disgusting to see that much life wiped out. To see the quality and beauty of that stream and then to see what happened to it, well, it really tears at you.

The gas industry is the most unregulated industry in the nation. However, even the regulations that are in place, such as the treament of wastewater are almost impossible to enforce because there are not anywhere near enough inspectors. Another problem is the remoteness of many areas which makes it easier for gas industry employees to cut corners and discharge wastewater into streams and rivers without permits or proper treatment. If this is happening, it must be stopped. Citizen watches may become necessary in every area where drilling is taking place. 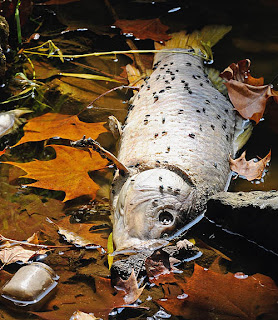 Read Don Hopey's poignant article published in the Pittsburgh Post-Gazette on Sunday, September 20, 2009. We are going to experience more and more fishkills and polluted streams. Gas drilling in the Marcellus Shale is only just beginning to invade Pennsylvania, West Virginia, New York, and Ohio.

DEMAND ACCOUNTABILITY!
REPORT VIOLATIONS!
Posted by Peacegirl at 11:46 AM

Interesting video. Water seems to be fairly clear. Does anyone see a massive algae bloom in progress?