Earthquakes in Cleburne, Texas, Cause Concern 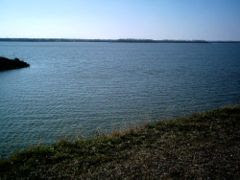 The mayor of Cleburne, Texas, Ted Reynolds, acknowledges that some of his constituents believe that a June 2nd earthquake in his town may have been caused by gas drilling.

We haven't had a quake in recorded history, and all of a sudden you drill and there are earthquakes.

There have been other small earthquakes since, all with a magnitude of 2.8 or less. One quake occurred just as the City Council was meeting in an emergency session to discuss what to do about the ground moving.

There are about 200 drilling sites in Cleburne, a town with 22,000 people about 50 miles southwest of Dallas. Some residents didn't feel the quakes, but others ran outside to see if a house had exploded. The city manager said he thought his wife was closing the garage door.

Some people are concerned about an earthen dam at Lake Pat Cleburne. Although few fear a catastrophe, the ground shaking is worrisome. Townspeople want to find out what is causing this strange series of tremors. Chesapeake Energy, the gas company responsible for the drilling in the area, says it is eager to get the facts and cooperate with researchers in this case. To date there have been seven reported earthquakes in Cleburne, the latest one on July 10th.

Read two articles about these earthquakes here and here.

DEMAND ACCOUNTABILITY!
[The picture above is Lake Pat Cleburne.]