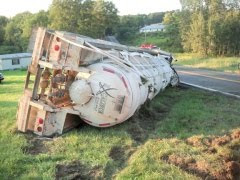 [Photo Credit: James Loewenstein, Towanda Daily Review]
Yet another accident involving a water tanker truck has occurred in Bradford County, PA.  Last night a Towanda man says he could easily have been killed when a huge water tanker truck lost control of his vehicle about 6:30 p.m., causing the truck to roll over as it came out of a sharp right-hand curve, narrowly missing this man who was driving a minivan.  The truck had the words "Excalibur Energy Service, Inc." on it. (Excalibur Energy is a firm out of Dallas, TX.)  The driver of the minivan said it was the scariest situation he has ever been in, according to the article in the Towanda Daily Review. He had to quickly speed up and veer off the road to avoid being hit.  Had there been a guard rail there, he thinks he would have been killed.

Note from this blogger:  I have driven on this road and turned at this very curve quite a few times.  I can attest to the fact that it is an extremely sharp curve, and I can also attest to the fact that these truck drivers do not handle their vehicles in a safe manner much of the time.  It is very dangerous to be on the road with these trucks.  A couple of times I have become really alarmed and thought I might have to drive off the road to avoid them.  And in Asylum Township, driving off the road often means driving into a ditch.  These are narrow rural roads, and many of them are all torn up from the heavy gas drilling trucks, making it even more dangerous to drive around there.

DEMAND ACCOUNTABILITY!
BE CAREFUL ON THE ROADS OF BRADFORD COUNTY, PA
BIG GAS TRUCKS ARE EVERYWHERE AND THEY DRIVE TOO FAST
Posted by Peacegirl at 3:14 PM

you guys make me sick! slamming gas drilling and all of us making a living out of it you dumb ativist tree hugging pricks

Ed, if we could all feel safe around these big trucks, we wouldn't be complaining. And two more things: 1) I am an activist, not an ativist. 2) Your comment almost didn't get by the rude police here at this blog. Please use more appropriate language next time.

Thanks! Be safe. We are happy for you to earn a living. We just don't like being killed or maimed. I'm sure you can understand that.