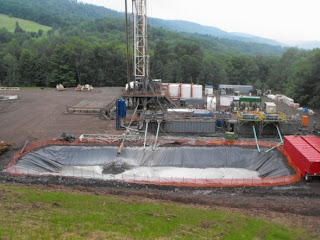 An article published in the Wayne Independent on July 30, 2009, reported a serious problem unfolding in McNett Township, Lycoming County, PA. A well casing may have breached, causing a substantial methane leak to spread from a drill site operated by East Resources. The PA Department of Environmental Protection is investigating the incident. It is believed that this leak entered the local aquifer, thus tainting well water in the vicinity. Methane is a major component of natural gas. It is colorless, odorless, and extremely flammable and combustible, especially if it builds up in an enclosed space. It can cause asphyxiation when it concentrates. Dimock, PA, has also fallen victim to methane migration. Several households there are unable to use their well water, and have even been instructed to open a window when using the shower.

The DEP found out about the problem when a concerned citizen from McNett contacted them, reporting that his water was discolored in a tributary and nearby spring. The state agency collected water samples from these water sources and sent them to their Harrisburg lab for evaluation. DEP comfirmed that in two Lycoming Creek tributaries bubbling was observed. Methane creates bubbles in water.

Gas corporations always downplay these incidents, using terms like, "rare," "unique,", "an anomaly." However, these words are deceiving. According to a recent article by Abrahm Lustgarten of ProPublica,

Methane has contaminated water wells in at least seven Pennsylvania counties since 2004 and is common enough that the state hired a full-time inspector dedicated to the issue in 2006. In one case, methane was detected in water sampled over 15 square miles. In another, a methane leak led to an explosion that killed The Rev. Charles Harper, a recently retired United Methodist pastor, his wife Dorothy, and their 17-month-old grandson, Baelee Harper. Their home was reportedly reduced to "a pile of rubble." Debris was found across the road, and insulation hung from trees 30 feet in the air.

Methane is the largest, but by no means the only, component of natural gas. It evaporates out of drinking water and is not considered toxic. (A friend who lives in Dimock, PA, told me that some days her tap water bubbles, indicating the presence of methane. This is a common experience in her daily life now. She doesn't drink her well water.) But there is a real danger when methane is in the air, which, of course, happens in every case where it is bubbling in the water. It can lead to explosions.

Gas companies, perhaps fearful that their industry will be blamed for these extremely dangerous situations, try very hard to find other causes for methane migration. In many cases, the methane seepage comes from thousands of old abandoned gas wells that are all over the PA landscape. (In fact, many of these old wells are not mapped and may exist without a landowner knowing about them.) But other cases of methane leaks, including several this year (2009) and the 2004 disaster that left three people dead, were linked to problems with newly drilled, active natural gas wells.

Posted by Peacegirl at 7:51 PM